Here are a few pictures of the two days I spent working with ABC News to cover the death of Michael Jackson. First, a scene-setter at the late singer's star on the Walk of Fame in Hollywood: 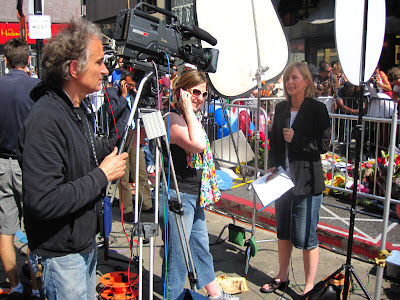 Trust me, you'd be wearing low-heeled, padded insole sandals, too. The pavement was hot and hard and the workday was 12 hours long.

All of these pictures were taken by the photographer friend I mentioned in the previous post. Ken Koller was dispatched to position a local news live truck at the scene. He didn't have anything to do but take the truck to find a parking spot and then keep it from getting towed. So instead of being bored, he walked around and chatted with friends and played with his new Sony digital camera. (I was so jealous. That camera was so tiny, yet took amazingly good pictures. Or rather HE took amazingly good pictures with it.) 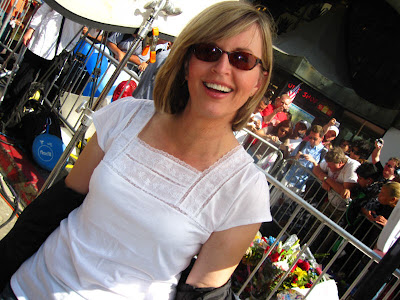 The BBC was the second crew to show up at the star that day. (We were there first.) They were quite nice, neighborly and very fun. Although, I will say the "presenter" who was there earlier, Emily Maitlis, was a firecracker. This guy seemed a touch bland after her. But I rather think chili peppers might seem a touch bland after her. 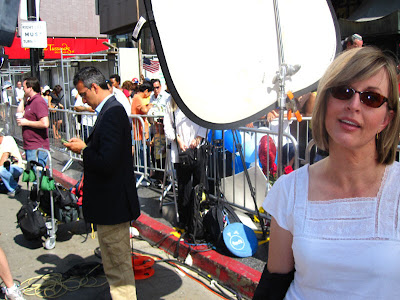 Too many pictures spoil the reporter. 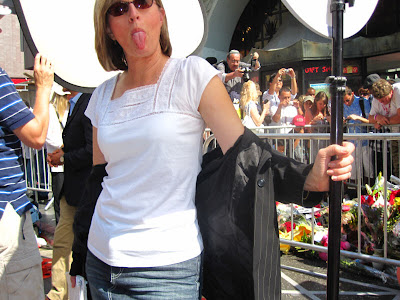 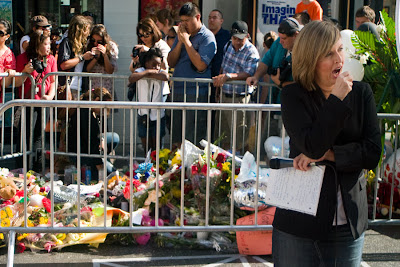 This was my favorite fan who showed up. 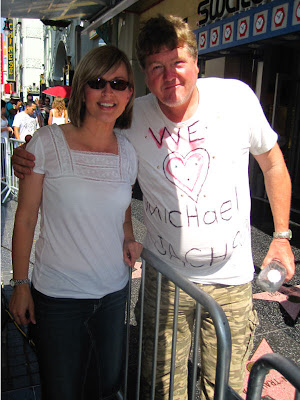 He placed a plasma TV on Michael Jackson's star. Nothing on the screen. No hookup to a video. Just a screen. Right.

Oh, and check on the spelling on his dead idol's last name.

Next to me in this next photo is the lovely and talented Jen Weiss-Watts, just completing her first day ever as a field producer. She was everything needed, plus professionalism and kindness. 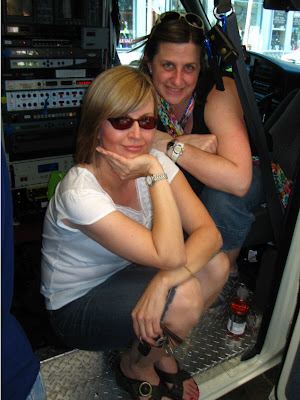 This was only Day Two. Doubtless there will be many more days to come in this story, but I'm off to new sights. Ta!

PS: I do feel bad that I only got photos with one producer, but during the first day, we changed locations three times and at the end of it, everyone scattered so fast there was no time for pictures.

Great photos and commentary! Thanks for the behind-the-scenes peek into the glam life of the location reporter. (I had NO idea you pulled 12-hour days.)

Despite the exhausting circumstances, still think it's kinda cool you were in the thick of last week's media feeding frenzy.

You know the saying, Jen: "If you want great pictures, HIRE A PROFESSIONAL!" ;)