Congress has gone home for a few weeks.  They didn't finish "the People's Work," but off they went.  It happens every year in August.  The House refused to approve a resolution to recess, so the Senate returns with what's called a Pro Forma session: member or two opens for one minute and then brings the session to a close.  There's very little "pro" about it.

As I was finishing up my day, I walked down into the Senate Radio - Television Correspondents' Gallery.  It's a wonderful place, full of history and tradition and enthusiasm for carrying journalism to the world.  It's also a journalists' delight as a reading room.  A little bit of everything and one or two of everything.

Today, I spotted a commemorative issue of Politico on the coffee table.  One issue covered in colorful drawings and imagery of the upcoming Democratic Political Convention upcoming in Charlotte, North Carolina.  (No, I'm not going, but I've been before.  Lots of other work having to do with staying employed here in Washington to do whilst the parties... party, right?)

Barack Obama, Star of the Show, is featured on the cover.  Fair enough, right?  One issue of Politico with the Democratic Party's Commander in Chief, coming right up! 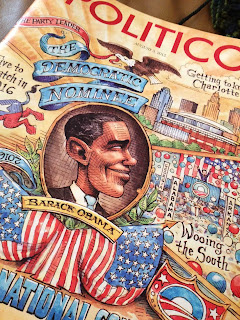 I picked it up and was talking with a staffer.  He thought (as I did) that the issue would be about Charlotte.  You know, "things to do when you're sick of chanting 'FOUR MORE YEARS, FOUR MORE YEARS' " ad infinitum.  But the issue is actually more of the daily send-up of political news, and a few interesting tidbits.  I thought "that's nice.  They're putting out special issues."

Not so.  Here's the flipside. 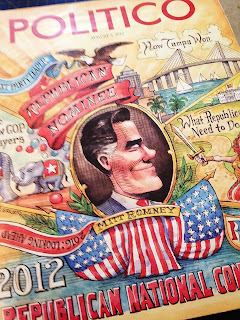 Equal time.  Even in the Senate R-TV Gallery.   Have a good weekend!