One of the many amazing things about the Internet is how it is bringing together the world. For instance, in the last month, I've swapped a couple of notes with Sinead O'Connor. You remember her, right? She had several hits in the 1990's, including my personal favorite "Nothing Compares 2 U," which was a cover of a Prince song. Ahhhhhh! To this day, I love that song! 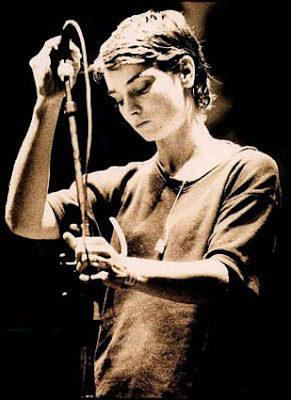 She had an interesting look about her. She often shaved her head down to mere fuzz, wore little or no makeup and yet somehow her eyes seemed very expressive and soulful as she sang.
It was all so perfect until she ripped a picture of the Pope in half on Saturday Night Live at the conclusion of her song. It didn't bother me, but it annoyed millions of Catholics and yes, I did wonder what the devil was up with that? So when I saw recently that she had written a column for the Washington Post on the topic, I was interested to read it. You might find it insightful, too. In reviewing her article, it seemed she explained in detail the historic setting and relationship of the Irish and the Catholic Church, the handing over of Irish children to trusted priets and all other details of why the Irish people are so particularly angry at the current Pope for his response to their anguish over child sexual abuse by pedophile priests. I actually thought the Irish mother made the case extremely well. And I emailed her a note:

I read your op-ed piece in the Washington Post today. I thought it offered a lot of insight to the American people. Thank you for presenting it. I hope you don't get too many ugly, angry emails.

Imagine my surprise when she responded back:

Thanks Marti... Have had a hundred or so e mails but only one hateful... Which I wrote back nicely to... So... All's well. Thanks for writing. Sinead x

I've fired off missives at NYTimes.com writers, too. It's not too hard to do. They leave an email address. And if I'm moved by the writing, my fingers do the walking, er, talking in this case. Yet the kindness of a reply still surprises and pleases. Remember the blogs and emails from Jan Karon & Co? Pure pleasure! It is a small world, afterall.
Then there's the case of the blog comments. I'm starting to get them from Asia. For instance, this comment on the last entry:

If you speak Chinese, great. (No need to check. I never approved the "comment." This is a PG-rated blog.) If you don't, here's what Google Translator offered:

True love, is take care of your heart is.

True enough, but when you click on the picture of the sender.... YIKES! That's not LOVE! It's something else and is that even legal in China?
Good and bad in the whole "small world" concept, I guess. But you might wish to try this yourself: get chummy on email with someone on a far continent. Might do us all a world of good!
Posted by Marti at 5:08 AM 3 comments:

Sometimes, a man has got to be A Man.
A man makes his own decisions, runs his own races, battles his own demons and kills his own petunias. Or something like that.
This is about priorities. Which is more important: 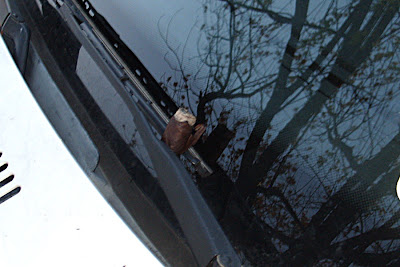 Smoking the cigar all the way to the very last little bit? 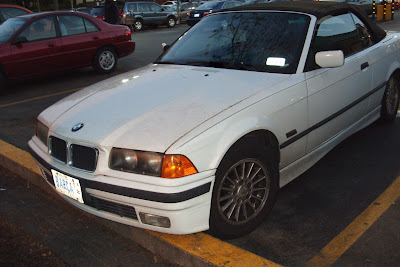 Or not starting your $55,000 foreign-made convertible on fire?

I am sorry for all the financial losses to airlines, personal inconveniences to travelers and general annoyance of the volcano in Iceland. 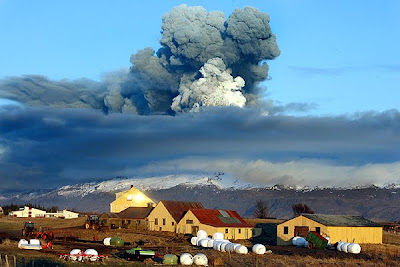 Can I also express my gratitude that the root of such a problem is simply Mother Nature doing her thing and not something infinitely darker? I know that doesn't comfort those stuck on The Continent and airline investors. But shouldn't it?
Posted by Marti at 10:14 AM No comments:

Get the kids out of the room. I'm going to swear.
It is Springtime in Washington. Naturally, you've seen some pictures. And now, you're about to see mine. 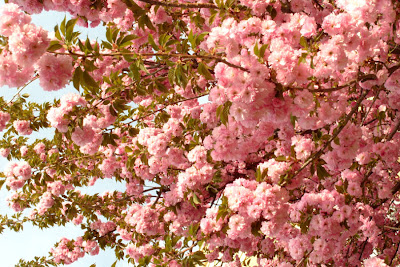 I actually took that photo myself. The sky is blue; the flowers are pink; everything is in proper focus and framing. You're shocked, aren't you? The famous cherry blossoms of Washington are so stunning that even my poor photography skills cannot dim their beauty. 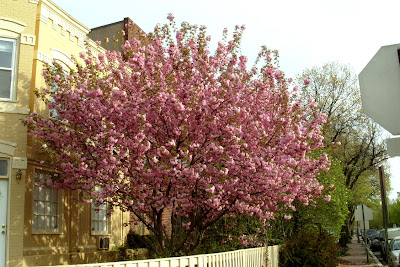 It's lovely, isn't it? Flowers and flowering trees are on every corner... 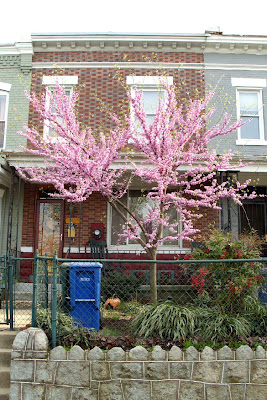 ...and in front of even the most humble rowhouse. This is what it looked like for the first week of April. But then there's this other angle... 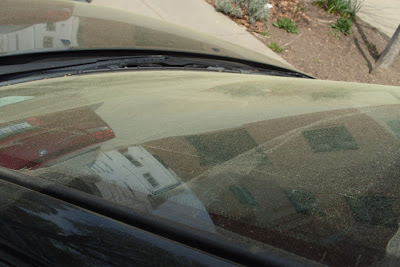 This is the windshield of my car. Do you see all that crud covering the windshield? That's one day's worth of POLLEN.
(Right here, I want you to know, I have NO known allergies, but if you pour rocks in my eyes, yes, it will bug.)
So what is this next shot, you might ask? 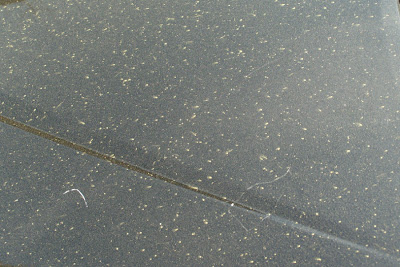 That is the front hood of my small BLACK car. Well, somewhere under all that pale green gunk, right? You can see where the nasty little pollen-carrying meteors struck down and the residual muck left behind. Do you know anyone whose eyeballs can withstand an onslaught of this level of pollen, stamen, floral debris flying by on every breeze? I think not. 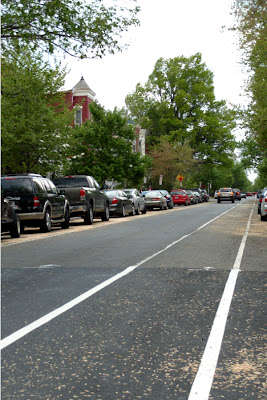 I hate to gripe, but our city's streets are not "paved with gold." They are clogged with pollen, seeds, and assorted other green and eyeball-gravel-inducing agonies. Little microscopic things that nature intended to grab onto things; born to attach by use of hooks, burrs and the equivalent of organic Velcro, carried on breezes to sanctuary in any passing human's ocular or nasal orifices. 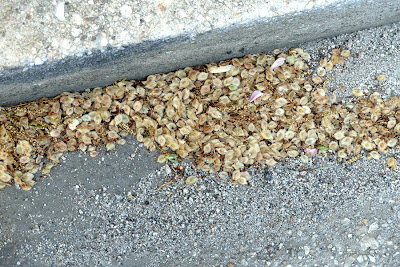 My eyes turn red, just looking at the six kinds of organic clutter in that gutter. The sad thing is, our city's most nicest residents end up playing in these streets. 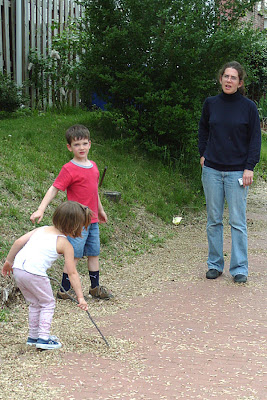 This is Jordan and her brother Henry; that's their very generous mother standing by to allow me to photograph them. They were on a bit of an inner city nature hike. 4-year old Jordan has just discovered the wonder of STICKS. (Forgive the photo; Jordan is quite beautiful and Henry is a man after my own heart. In other words, he has a pulse and is wonderfully polite and charming.) There is no escaping this annual air-borne misery because every homeowner in the area wants to have something, no matter how small, flowering in their front yard. 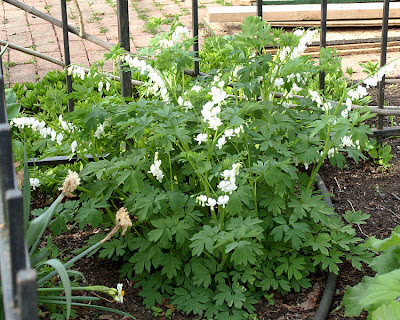 All of which leads me to one inescapable conclusion and agonizing statement: 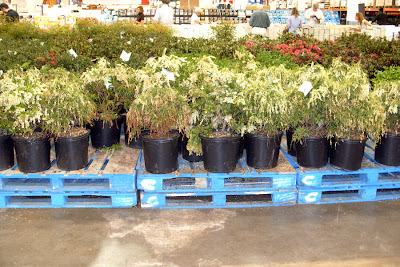 I didn't notice Mary right off. I was walking towards Bethesda Bagels with a former colleague that I hadn't seen in years. We had met for a "catchup" over a quick drink.
Mary, however, was not to be missed. She's a bit insistent, matter of fact. But... in a good way. In this picture, she's sitting right outside the store. You can see if her you look close, sitting as the woman with the blonde crew-cut hair passes by. 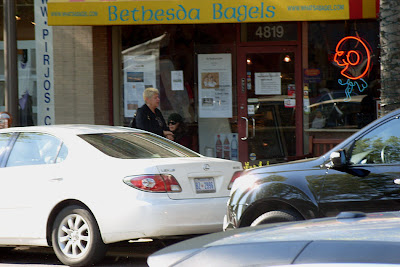 That's her, behind the "Jackie O" sunglasses and green hand knit beret. She's quite an eyeful, once you stop to look. I might not have spotted her at first glance, but once brought to my attention, it was impossible to miss the generosity of spirit.

When I lived in Bethesda several years back, I would often stop and grab a dozen bagels on the way home after work. This past Friday night, as we walked back to my car, I thought it would be nice to see if they had any good flavors, but when I got there... the door was locked.

The sign on the door said "8am to 5pm." It was 4:59:30pm on a Friday evening and the employees inside were determined to be on time. I could see them through the locked door where they were helping their last customer. At one point, they came over and checked the door to make sure I was locked out! Cruelly determined buggers! 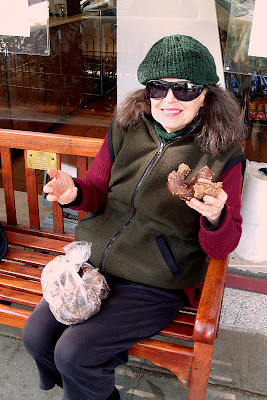 I was still at the door with my old friend, hoping they'd let me in to buy a dozen, when Mary spoke up.

Er, yes. Thanks for that. I must admit I have no great love of people who point out the obvious, so this was not particularly appreciated commentary.

"They just locked the door before you walked up."

Again with the painfully obvious? Arrrgghhhh!!

But then I looked over at her, sitting there on the bench in front of the bagelry. She was pure fun. Just a picture to look at. Sitting there with an elfish grin and a mouth happily full of bagel. How could I not like what she brings to the Candy Party?

You can't tell (because even with a point-and-click, I am hopeless!) but she has thick, dark, wavy brunette hair and wears lipstick that could best be described as deep cherry. And she was busily gnawing away at the bagel in her hand. 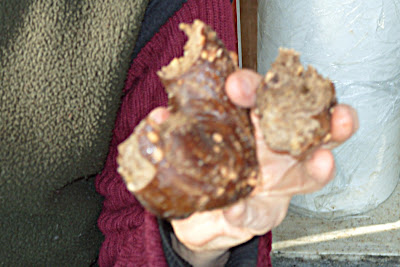 "What kind of bagel is that?" I asked. (You can't tell of course, because I'm so bad with the camera.) It looked the color of pumpernickel, but what was that stuff sticking to the outside of it?

Those of you who have hung with me know that I have an very odd curiosity about other people's food. I'm downright nosy. Constantly. And yes, I'm sure that is as annoying as it sounds to those around me. I just can't help myself. I always ask.

The bagel in her hand (as bad as that picture is, it was the best of the FOUR that I took of the bagel she was eating) smelled slightly sweet and looked a little damp. It looked like it had been freshly baked and sealed in the plastic bag. For a little. Too. Long.

Mary didn't seem to mind my asking, though. In fact, she seemed excited to tell me.

"It's a French toast bagel. I got a dozen of them for $2.59 on special, because they were closing. Here! Take one!" She offered me the bag to choose my bagel. 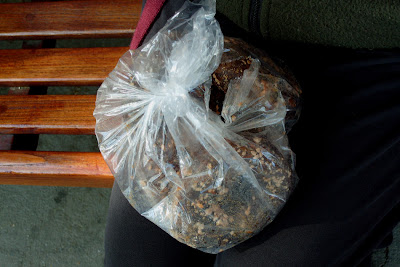 I'm curious about other people's food, but I draw the line at taking it from them. Nobody likes a mooch. So while I'm curious enough that I have to ask, I'm not dropping hints. You know that about me, right? I don't want to mooch someone else's food.

But Mary was insistent. In the nicest way possible, she made it clear that she truly wanted to share the experience (maybe because I did ask again if it actually tasted like the breakfast item?) of this particular bagel.

She said I should take a bite. And before I knew it, I had torn off a piece, offered my dear friend a bite and when she declined, stuffed half of that somewhat rubbery chunk in my mouth and commenced chewing. Ahhhh! It was a bagel after my own heart!

It was quite good: sticky, slightly sweet as it dipped in Mrs. Butterworth's or Log Cabin or something even better... and so bagel-chewy-wonderful! A very satisfying bagel experience that my friends in the West will never truly understand. An East Coast bagel can be a revelation and this one surely was! 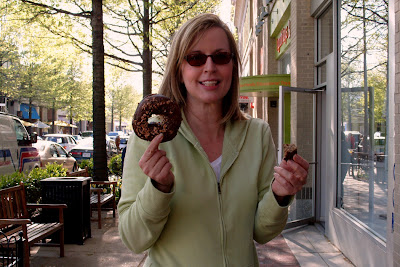 A second later, Mary insisted that she give me a bagel for my own. It's a sharing thing, isn't it? The communal breaking of bread defines us as humans and in a twinkling, turns someone who was a perfect stranger minutes before suddenly into...

Mary never told me her last name. She seemed a bit concerned that she'd end up in Time Magazine. I said no, just my own little corner of cyber Happy Town.