This was the scene today outside the office where I work weekends: 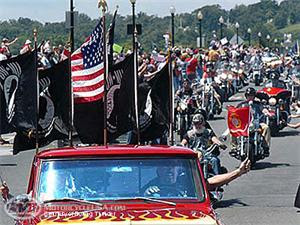 I sort of dig it, don't you? My coworkers weren't any too happy about an estimated 400,000 motorcycle enthusiasts, albeit veterans descending on our fair city. "Noisy, and they will be here until at least 6pm, riding around the National Mall, gunning their engines and making noise," said one of my charming colleagues. But me? I found it sort of sweet: American motorcycle clubs (that quintessentially American group) honoring those who served in the United States Armed Forces.

I almost felt as thought I wasn't serving them and their memories right to go out and stand along the sidewalk and cheer these bikers on. Seemed like the American thing to do. By the way, I haven't forgotten about this little blog, nor its stated purpose to enjoy every day people along my way. I am a little absent because I'm working on the launch of a new website. I can't tell you more about it other than it's the dream of a great career. I'm very excited about it and hope it will be something you'll enjoy as well. Soon, I'll let you know when it's ready and where to look.
Posted by Marti at 6:12 PM No comments:

It was not my intention to dine on fish parts when I went out, but that's how it ended up. Here's how that happened. I went to hangout with a friend who's been asking to get together with me for awhile. We went down to the Old Post Office in Washington, DC. We were hoping to go up in the elevator and catch the view. The weather's been just about perfect for the last couple of days. But unfortunately, we arrived just as the last load of elevator-view-watchers for the day was emptying out. No trip to the top for us.
So we walked around for a bit. Did a lot of people watching. And then he said he wanted to go get some dinner. He wanted to try Greek food. I'm generally pretty adventurous, right? (Barnacle-like mollusks peeled off bay rocks and directly into open mouth on Molokai, chicken feet in Hong Kong, fried frog in Cambodia, smoked goat, quail eggs and innumerable attempts at both Rocky Mountain oysters and dog.. ring any bells?) Except that Greek isn't adventurous; it's merely great food. Oh well.

I ordered the fish. The fish turned out to be bass, sauteed in 0live oil and served on a platter. When it arrived, the waiter asked if I wanted him to debone it. I declined. I said I could handle that. And I did just fine. It was excellent fish and nicely done. Crispy on the outside, moist and flavorful on the inside. I ate and ate and ate. And then I turned the carcass over. A weird little quarter-inch white ball rolled to the side. The fish's fried eyeball! I batted at it with my fork. ("Don't let a little respect for the dead stop you from playing with your food, Marti.") The eyeball itself seemed sort of dense. Maybe even solid as it rolled up and down the plate to my very great amusement. "Look!" I said to my date, with joyful glee, "The fish's eyeball." (Fish eyeballs are always surefire fun. I've grossed out many a dining companion before by merely sticking a fork in! For those of you who arrived here from google, yes, they are also considered an Asian delicacy.) "I dare you to eat that! I'll give you five bucks if you do!" my friend offered. Okay, I am not this poor. But I've heard that fish eyeballs are an excellent source of Omega fatty acids and this one seemed fresh. It seemed firm. It did not seem mushy, gooey, squidgy or otherwise likely to explode in one's mouth. Eating it seemed sorta... doable.

So what do you think happened next? Before I could stop myself, that eyeball was balanced on my fork. I tossed it into my mouth and washed it down with a big gulp from my water glass.
It was done! Gone! Down the hatch! 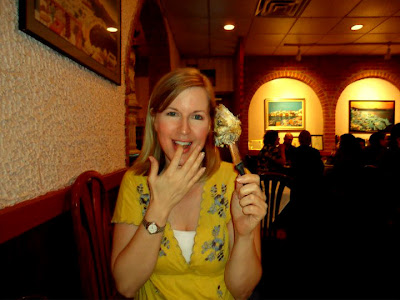 "Five bucks, Sir. Give it up!" That's right, money AND the bragging rights for a very long time. The end.
PS: That's the fish's head on the end of the knife. Next adventure: amateur taxidermy?
Posted by Marti at 3:55 PM 6 comments:

In Touch With Your Inner Child??

I was coming home from Downtown DC, one afternoon this week. I was deep in thought as I left the Metro and crossed the street toward my car. I was contemplating the afternoon meeting at a law office, my latest job application, the new website that a friend and I are building together, whether I should get my hair cut, how the Universe was formed and.... 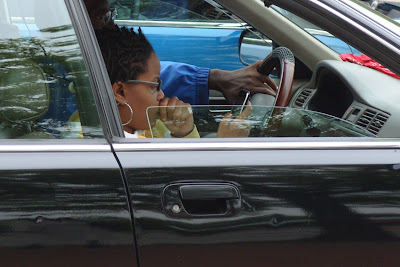 ...what kind of deep-seated emotional need and insecurity would motivate a woman suck her thumb after the age of four? I didn't stop her to ask, so I guess we'll just never know.
Posted by Marti at 5:03 PM 4 comments: