So there I was, sitting at home, quietly writing *yet another* essay on why Republican politicians need to learn to keep it zipped, when I got distracted by some real work. Suddenly, I was whisked away from the tedium to a house in Holmby Hills, followed by a trip to Grauman's Chinese Theater, before finishing up at the Los Angeles County Coroner's Office. All in pursuit of covering Michael Jackson's demise and the resulting investigation for ABC News. A rather densely packed 12 hours, huh? It was so much fun that I did it twice. Well, okay, the second day was spent all in one location: the Hollywood Walk of Fame. Yikes! What a pretentious name.
Lots of live shots. Lots of crazy folks. Lots of fun. And lots of pictures snapped. Here's the one I have to show you: 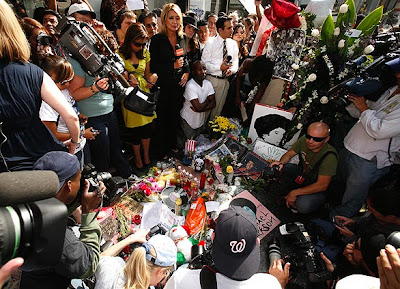 Yes, that is my extremely white arm, frame left, two-thirds of the way up. Pathetic, huh? I'm having a touch of computer trouble (Laptop with dvd but no internet. PC with internet but no dvd. Why me?) and at this time can provide only one photo, swiped from LATimes.com. I had a seriously great time. The best thing about such national news events is that in between the demanding clients, the completely fascinating weirdness of a life lived "Jackson," and all the nutty fans, such events are wonderful places to see professional friends, console each other about the state of the business and hear the latest goings-on at various news groups around town. In this particular case, it was hard to hear that KTTV (Fox 11 in Los Angeles) laid off over 100 people on Friday. You can't see him, but a favorite investigative reporter friend from that station was standing to my left (which is his favorite position on any given subject) and I am hopeful for his future even though I've heard KTTV is offering contract renewals with 30-40 percent pay cuts.

We all know it's a tough time among journalists. Heck, it's tough for almost everyone. And it can seem strange to people outside our ranks when major news events, often tragic in nature, bring us together to support each other about things entirely unrelated to the events at hand. We tend to focus on the event as news, and in between chasing the story, talk over what's bothering us. But it is part of what makes us objective. It can also sometimes make people think we're a little jaded and at times, downright calloused. Yet I hope that it's a tradition that never has a chance to disappear.
Posted by Marti at 7:46 PM