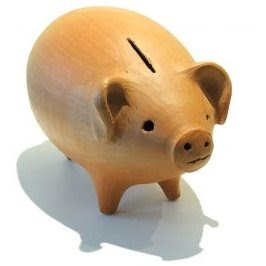 I reached into my knapsack and pulled out a brand-new cosmetic item, still in the box. I pulled out the old one, and noticed there was still some product in there. I thought, "No, no. You are going to use up every drop of that cosmetic. Use it until it is completely gone before you get out the new one and start on it." That's right. I'm cheap. In the past, I've bought dresses for special occasions that never came up. I bought a red silk dress that I bought on sale 15 years ago in Knoxville, TN for a "special occasion" that never happened. The dress still had its tags on it when I donated it to a mission store a year ago. The style is outdated and I no longer cared for the color. Such wastefulness, but that's who I was right at that time. But aren't most of us becoming a lot more cognizant of using things completely up? We want to get full value for the amount that we paid. The environmentalists among us must be thrilled that Americans, long known as the most wasteful consumers in the world, are now suddenly interested in using and reusing items until they are finally and at last worn out. A friend was talking over the weekend about how she and her husband have gotten a new stove.

"My sister-in-law wanted a different color, so they were getting rid of it. It's in perfect condition except that the oven display up on top doesn't work, so you have to keep track of where you set the temperature to start and then it's 5 clicks more to 350 degrees. But it works just fine."

And she's thrilled to have it. She now has her heart set on a new sink, but she wants it to fit in the unusually-sized spot left open for it without making further adjustments, so she's not sure how soon they'll find the perfect sink. Another friend who was also listening to this suggested, "Oh, you should check the Re-Store Shop over on Main Street." I have other friends who spend more on their homes. They aren't in the middle of raising two small children on one small-ish paycheck and struggling to make ends meet. But I don't have any friends that I like more or who make me feel more at ease. They remind me of another conversation I had with a friend who brings in over $100K per year herself, while her husband's salary (I guesstimate on both salaries) runs well over $200k. The friend needed a new dress for a special evening out, and she said,

"I just hate to shop. And I hate the idea of spending a lot on a new dress that I'll only wear once or twice."

I said I completely understood and was a bit tight on spending on myself as a rule. I said "In fact, I'm kinda cheap." She said "I know. It's one of the things I find endearing about you." I think I got a little head-rush at that moment. I still am quite taken with thinking about it. I guess I always felt uncomfortable that I was careful about my spending. But suddenly, here was one of my more cherished friends saying she knew who I was and liked me not in spite of it, but actually a teensy bit more because of it. It's unlikely my two sets of friends will ever meet. They are from very different worlds and I'm quite certain they wouldn't immediately see how much they have in common. But I guess family budgets everywhere are "same circus, different tent." Anyway, I think we all need such friends right now. We have probably had them all along, but maybe this recession allows us the luxury of admitting to ourselves and our friends that we see who they are and accept them in full glory for it. And relish the same from them.
Posted by Marti at 3:30 PM

For some reason I really like cheap rich people. Makes me feel like they're not abusing their money or something.

Still waiting on that stove, dang it. And still excited for little tiny bits of progress. :)