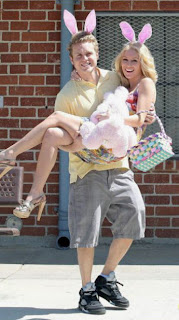 I'm just going to say what we've all been thinking for a very long time. It sucks being a celebrity, doesn't it? There. I've said it. There are rumors out of Hollywood that celebrity participants Heidi Montag and Spencer Pratt were evacuated to a hospital after Heidi started throwing up during "punishment" on a reality show. She and her um, husband/fellow spotlight chaser, are currently "starring" in the NBC primetime reality show, "I'm a Celebrity... Get Me Out of Here!" Or as I think of it when I think of it, "How Low Will I Go to Get Attention?" So what happened? The truth of that depends on who you believe. This weekend's grab for attention by the Montag-Pratt duo included multiple attempts to quit the show earlier in the week. To punish them for this, the newlyweds were put in a darkened isolation chamber. Beyond that, the show's producers say the couple had food and water and spent most of their time sleeping. The entire thing was filmed and the couple emerged after several days "in great spirits." But the couple and their relatives (entourage?) say that bugs were lowered in on them in the dark, there was no food, and when Heidi began throwing up, "She thought she was dying," according to celebrity-sister-in-law, Stephanie Pratt. Heidi Montag-Pratt was later diagnosed with a gastric ulcer. Ok, but the name of the show is "I'm a Celebrity... Get Me Out of Here," right? And the premise is that bad things happen to famous people who then throw temper tantrums, quit the show and stomp off in a somehow entertaining display of poor sportsmanship, right? So... if they tried to quit, then why the punishment? Wasn't that the show's intention all along? Wasn't that where it was headed from the start? Wasn't that not just part of the game, but The Game? It sucks being a young couple whose relationship beyond its publicity value has been questioned from the start. (You think that picture is annoying? Google their names and click on images. These two never miss a chance to pose.) Being stuck in a darkened room for 3 days with someone you married within the past year sucks. In the face of all that, the bugs seem a little extraneous, don't they? What I really want to know is why do we pander to people who are so starved for attention? At what point are we going to realize that this is a sickness and we're abusing these poor, emotionally-deprived-as-children people in their endless search for someone to watch them. In a real life display of... well, absolutely nothing, Kal Penn, the successful, working actor who quit the show "House" in favor of taking a public servants' salary for working in the White House Office of Public Engagement as a liaison to Asian American and Pacific Islander communities has gone off the radar. He's not at the set of "House," nor is he at the White House. (You remember this story, right? In a moment of overwhelming love for his country, Kal or Kumar, if you know the "Harold and Kumar" movie series, said he was so excited about the prospects for change with the Obama administration that he longed to leave acting and work for that change with President Obama. And President Obama's office took him up on it.) The White House denies that he's AWOL; they say he simply hasn't started the job yet. And as celebrities do, he had a prior commitment to shoot a movie in India. That's a place where bugs really can fall through the roof in the dark of night. It sucks being celebrity, doesn't it?
Posted by Marti at 11:14 AM

Harsh! No seriously! I would FREAK OUT if someone dropped bugs on me while I slept..and I'm not even a celebrity! There is no amount of money in the whole world.....

And yes, I wish people would stop giving Speidi, the Octomom, and all other annoying "celebs", (Paris Hilton), attention. She makes ME want to barf.

And for the kind of money and exposure they are getting, what's a few bugs between friends? Sheesh, I've slept in worse conditions in Third World Countries.