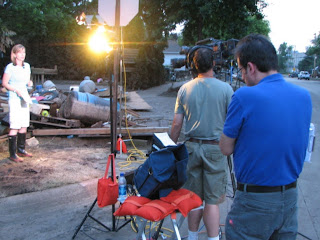 One of the hottest topics in television news right now is the pooled sharing of video resources by stations in (mostly) major television markets. It's already going on in Chicago, Los Angeles, and several other cities. It's controversial with a lot of unhappy people on all sides.
So here's my vote. I'm for it. Before you throw a rock at the back of my head, let me explain.It's a scary time right now for all of us, in and out of the journalism and television industries. I feel like whatever those stations have to do to actually stay in business while the business model is rejiggered so that it will actually work again is probably a reasonable thing.It's tough personally because we've all been able to rely on our careers and the station taking care of us and our union protecting those jobs for us for a very long time. We're going to have to take care of ourselves now. It's time to grow up (admittedly, this is an industry where juvenile personalities and behavior were often what was needed to succeed) and be responsible for ourselves. For some of us, that change will be too great and it may be time to get out of the business.But sharing video doesn't mean the demise of the business. It doesn't even mean the demise of quality journalism. It might mean the survival of some groups that are struggling with both the recession and the decline in viewership that is causing the television news industry to contract.As I understand it, a lot of the video-sharing arrangements are for news conferences, which are scheduled events where everyone simultaneously gets the same information, interviews and elements. The quality of reports done on such stories isn't dependent on photographers (although if one of the stations decides that's where to stick the least qualified guy working that day, then it could really sink things fast) but on the reporting and the reporter.Just imagine... it might actually free up crews to be out of those hideously boring news conferences to cover other issues. Who knows? They could conceivably be able to cover them with some depth.Before you start to argue with me, consider that some of those considered to be the top journalists in the country are working with "pool video." Many of the events at the White House are covered by the "pool crew."Among national news organizations, there is a fair amount of sharing already going on. On occasion, someone will get back to the office, have techical issues or have missed something and make a call to a friendly competitor who will occasionally share their pictures. Why? Because they know that they may be the beggar next time.A reporter succeeds based on his or her own work. He or she succeeds on the strength of their sources, relationships, abilities and efforts in asking the right questions, focusing attention, offering insight and writing.Photographers don't like it because, well, that's a no-brainer, isn't it? They don't like it because as the use of pooled video expands, the job pool for photographers shrinks. I had lunch with a beloved photographer friend this morning and we talked about his future.He's a staff cameraman at a Los Angeles station, and is considering leaving his position sometime in the future. He and his significant other visited another city recently to "scout the lay of the land.""I'm never going to get another staff job," he told me over my fish taco. "Those days are over and gone." I basically agreed with him and mentioned that network freelance photographers were among the happiest people I knew.A freelance photographer makes his own hours, takes his own calls, accepts (or declines) assignments and has an incredible amount of personal and creative freedom. He works hard, but the bottomline is he works when he wants to.It's an uneasy time. Anyone in freelance journalism, writing or photography has always needed nerves of steel. They've also needed skills to budget time, money, and resources to make occasional suppluses last through leaner times. It's not for the lazy, but it's do-able.Someone said to me awhile back that my industry's "golden days" are over. That may be true for television, but it's not true for journalism and it's not true for photographers. We're still going to read and look at video, whatever the source. It is likely true that the laziest days are over. But those who truly succeeded were never lazy anyway.
Posted by Marti at 3:03 PM