When Is a Pimp NOT a Pimp? 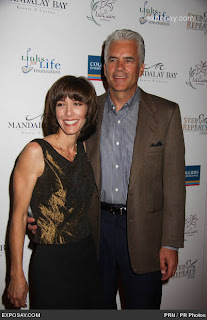 When is a pimp not a pimp? Perhaps it's when he is trying to get money from the man his wife has been having an affair with. In that case, the law has a much uglier word for it.

Consider the case of Senator John Ensign (R-NV) who just announced that he had an affair with a campaign staffer and apparently, we are now told, the wife of a man who he says tried to make some money on it. The picture at right is of Sen. and Mrs. (Darlene) Ensign.

Prostitution is legal in Nevada, but not in Clark County, which is where all of the parties involved make their homes.

According to Sen. Ensign, he had an eight month long affair with Cynthia Hampton, who was working as treasurer for his political committees. He came forward with this public admission several days ago, and since then, there's been a lot of talk about why he did that? Why the public mea culpa when he said he'd apologized to his wife, spoken to his church leaders and was privately trying to put this behind him?

Well, it now appears he came forward to stop his mistress' husband from outing the liaison. According to the Ensign camp, an attorney for wronged husband, Doug Hampton approached an attorney for the Junior Senator from Nevada last month about a financial settlement.

Oh, okay. A financial settlement? Is that what they're calling it now? I find myself wondering if the price isn't supposed to be negotiated before the deal is uhhhh, consummated?

The Ensigns and the Hamptons were lifelong friends, according to reports. But perhaps the "friends and neighbors discount" wasn't offered?

If it's true, extortion isn't funny. And neither is a man who belatedly pimps out his wife.

I don't ever have sympathy for someone who commits adultery within their marriage or another person's marriage. But now that the Senator presumably is focused on working things out with (the only apparent innocent in this fiasco) his wife, and her own husband has shown that his greater concern for the financial aspect of things, I can't help but wonder at the rude awakening Cynthia Hampton has had.

Note to RNC: cancel all political retreats and junkets effective immediately. Give campaign staffers extra leave. Immediately schedule MARITAL RETREATS, no staffers allowed. Kick anyone who tries to skip them out of party.