They Who Laugh Last...

Need a new iPod? Thinking about a Palm Pre? What about a new netbook? Think about it: when was the last time you bought yourself a little treat, electronic or otherwise?What if... we all stopped buying ourselves those lovely little fun things that we so richly deserve? What would happen to the world's economy, so dependent on consumers and American consumers in particular, if we quit buying every. little. thing. we. want. We like stuff in this country and now that we're all out of cash to buy it, our credit is spread too thin. 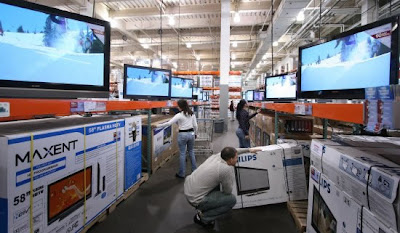 A Washington Post article relates an incident in Beijing when Treasury Secretary Tim Geithner spoke, reassuring the Chinese that their investments in American dollars were safe. Their response? They chuckled. They actually broke their polite smiles and laughed in Geithner's face. But if we were the world's leading consumers and our economy is now broken, it's not a laughing matter.
When I was a kid, my dad used to call me the World's Greatest Consumer. He usually said that when I spent 45 minutes running a hot bath and only 15 minutes soaking in it. He didn't like how long I stood in front of an open refrigerator, the way I dragged my heels, wore out shoes and wanted new ones for every high school dance.As an adult, I've always enjoyed paying my own bills and in review, I probably could have been more conservative in my spending at times. But some of my friends don't think so.

One of my favorite friends was talking about how she needed a new dress for the White House Corrospondents' Dinner. She said she didn't want to shop and she didn't want to spend the money on a "wear it once" outfit. I said "Yeah, I get that. I'm hate spending money on clothes like that. I'm sorta cheap, I guess."Her response? "I know. It's one of the things I find most endearing about you."You'd have to know how excited I was to hear that statement. One of my dearest friends was saying that she knew my secret, "got me" and still liked me. I felt weirdly accepted for myself. Go ahead and enjoy it with me.Back to our spending habits as a culture. We all know we spend way too much. The average American household is carrying about $10K in credit card debt and we have come by it quite righteously. We have spent and spent and spent. There are American kids who heard the word "no" from their parents for the first time this past year. It's a good word to add to their vocabulary.Our economy sucks. We're in trouble. And it's not just our struggle. The world's three largest exporters, Germany, China, and Japan are seeing their output down 33% already this year. Since we're the world's leading consumers, guess who they blame?It's interesting that after years of economic envy, when we start to fall, our economic partners think it's funny. They won't be laughing long.In the past, it was our own version of "if you build it, they will come." The motto seemed to be if you sell it, Americans will buy it. And if it's "tech," we'll line up to buy it at full price the moment it becomes available.

So imagine this brave new world that Chinese, German and Japanese exporters have inherited. If you can't sell it to those silly rich American over-consumers, you're going to have to find someone else to buy it.Let's finish the proverb: He who laughs last, laughs longest... if there's anything left to laugh about.
Posted by Marti at 7:36 PM

I would have laughed, too, in their position. I went to a city meeting recently where the first thing the presenters said was how trustworthy they were and how much integrity they had. Can you say, "RED FLAG"? I have never found that someone who claimed trustworthiness actually was.