Since one of my friends commented on how much she enjoyed seeing "behind the scenes" of coverage of a big national story, such as Michael Jackson's death, I thought I'd show you some more of the pictures you didn't see. We'll start with this first one. You see the young man "praying" there at the barricade in front of the dead singer's star on the Hollywood Walk of Fame? Yeah. I first spotted him around 7am on June 27th. He had his head bowed over that guardrail but his eyes weren't actually closed. Instead, his eyes were darting back and forth to checking to see who was watching him. He was positioned directly behind me, and as I watched a little longer, I could see that this "gentleman" was watching to see which cameras were on, and where he could best position himself to be in their line of sight. 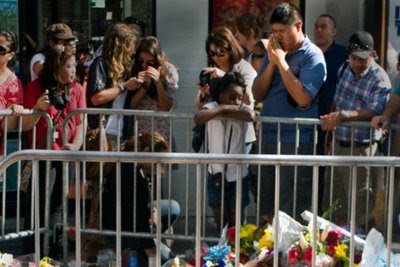 That sounds pretty bad, but guess what happened next? I pointed him out to the BBC and Reuters photographers, and then the BBC cameraman shouts to the Reuters photog, "Hey, make sure you get a shot of that dude who's praying." Guess what happened next? You got it: "praying dude" snapped his eyes shut and stayed that way off and on for the next two and a half hours. Whenever someone started to shoot, he started to pray. Not exactly sincere, is he? But he did make the LATimes, the TV Guide Channel and a couple of other media outlets. He invested 2.5 hours and got his 15 minutes. You already saw this next fan. He claimed to be one of Michael Jackson's biggest fans, but apparently can't spell his idol's name correctly. 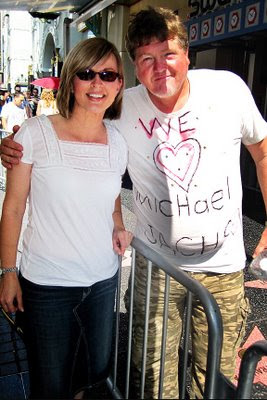 By the way, when I arrived at the Walk of Fame at 12am Friday night, I noticed a sharp increase in the number and quality of "party dresses." And not just any kind of party dresses. These were the most expensive, short little outfits I'd ever seen down there. Not a sparkly glove in sight.
To give you an idea, usually, the Friday/Saturday night crowds are bar-hopping, but these crowds were mostly on one side of the street: walking up and down in front the barricaded area of "the Walk." Maybe they were there to honor Michael Jackson, but they all seemed to want to get their moment in front of the cameras. Interesting, isn't it?
Please don't misunderstand what I'm saying. I don't want to suggest that Michael Jackson doesn't have his fans. He does. He was a huge influence in the music industry. He has legions of fans. His misfortune was dying in a town that is full of posers. And lots of those turned out to "honor" him and be photographed in doing so. It's stunning to think of the numbers of people who were hoping to be "discovered" at a sidewalk memorial, isn't it? This photo shows the reporter and photographer in position for a live shot. You can tell the shot is coming up soon because my jacket is on. It was so warm that between shots, my jacket was off and the sun glasses were on. 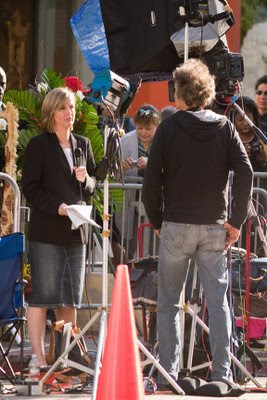 Next is a picture of the reporter, in a rare moment of doing what she's supposed to do between live-shots. I'm supposed to sit down and update my information by reading wire copy stories on my pda and maybe do a little writing. Usually, I pace. I pace a lot. I like pacing. I think it should be a national sport. I could be an Olympian. But for this moment, I grabbed a chair, sat, and read. 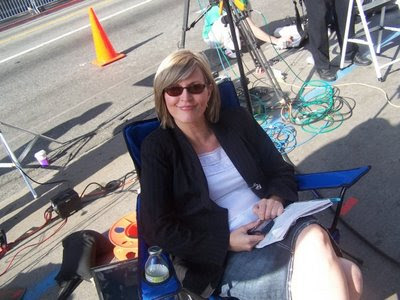 This is a photograph of a happy and successful crew: two truck operators, a correspondent and a wonderful producer. 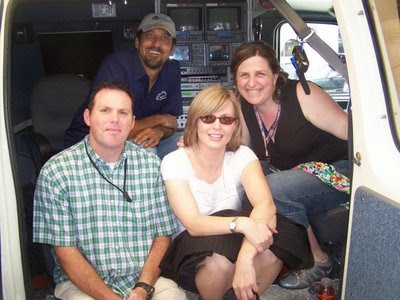 By way of explanation, I took no pictures from the first day after the 50 year old singer died. Candid pictures are something that gets done after the writing, tracking, shooting and other set-up are complete and between live shots. The first day's schedule was just too busy. We started at the Holmby Hills rental house at midnight, ran on to the Walk of fame at around 8 am, and then raced to the Los Angeles County Coroner's office by mid-morning. No time for intelligent, hard working and dedicated news crews to shoot pictures until Day Two and beyond.
Posted by Marti at 5:03 PM