To update you, I recently returned on a more or less permanent ('permanent' is all relative, right?) basis to the East Coast. Below are photographs and a little narrative of my trip.

I left California. I got up on Sunday morning after covering Michael Jackson's demise for two grueling (and a bit surreal) days to load my little econo-car at its limit. I then drove off on a new adventure.

On the first day, after drying my tears, I drove to Southern Utah to see some family. I found them under a rock in Zion National Park. 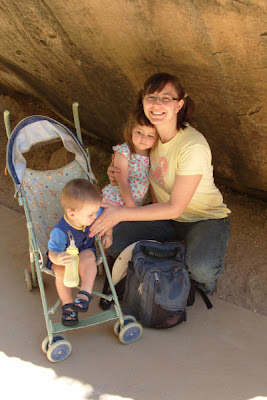 They were every bit as much fun as they look, but soon I was off again. I drove on across Utah toward Colorado. This is Spotted Wolf View, which hangs out over I-70. It goes out another 50 yards or so of gravelly drop-out path. 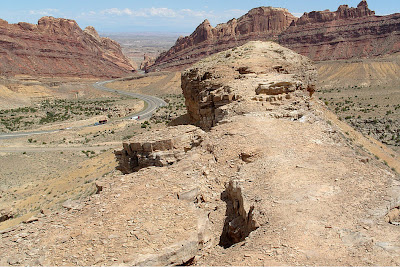 See that crack in the lower center of the photo? It appears that chunk of "path" to the left could fall off just about any second.

It looked like a great place to walk out, rather like this scene in the movie, "Pride and Prejudice" starring Keira Knightley.

Due to the fact that these are not climbing shoes... 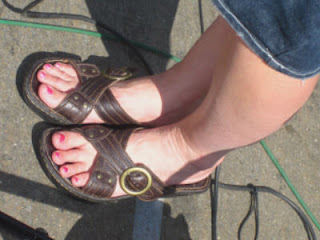 ...but are in fact falling to your death shoes, I did not walk out to the edge. I may regret that someday. But any regret will have to wait until I stop shaking at the thought.

Next I drove thru Colorado and into Kansas, which appears to be a beautiful, if seemingly endless state. Finally, I arrived at that spot of gastronomic heaven known as "Arthur Bryant's" in Kansas City, Kansas. 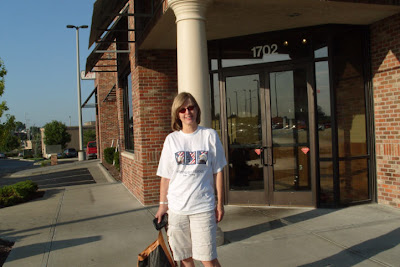 Here I am in front of Arthur Bryant's BBQ House at the Legends in Kansas City, KS. I'm particularly proud of this t-shirt. My Dad presented it to me just two weeks before. He, uh, didn't like the one I had worn to Father's Day lunch at my brother's house, which said "Jesus is our dishwasher" on the back. I don't think he likes colloquial humor. Oh well. 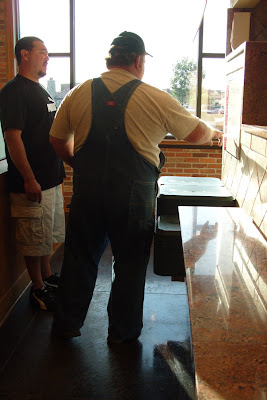 This generous overall-clad fellow was behind me in line. He said it was a great bbq place and since I'm a believer that "you are what you eat," I expect he'd be one to know.

He proceeded to order a luscious pound and a half plate of barbecue meat, including pork, ribs, and sliced brisket. He also got himself a large order of fries. I know this because they arrived just as I got to the "pay up, please?" part of the deal. He said "Aw, look what Daddy got!"

I asked "Daddy" if I could try three of his fries. He graciously agreed. I swiped 'em. I swiped my card. And I dashed around the corner to indulge myself. 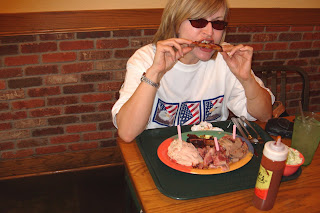 It's funny how in LA, those sunglasses look sorta hip. In a Kansas City barbecue house, they make me look a teensy bit like blonder, less hairy Blues Brother, don't you think? Of course, what they really do is let me hide behind them as I watch my fellow diners. This way, I can see their expressions as they gather their families around the table for the big treat. Yessiree! Arthur Bryant's is that good.

And "Daddy?" I passsed him and his pal on the way out. He said they would have invited me to dine with them, except I disappeared. I was actually a little worried I might have been tempted to steal another fry and that might have proven lethal. He definitely he could eat.

Next, I drove over to this place, Sheridan's Frozen Custard, which was also at "Legends." For those of you homebodies, "Legends" is a big "town center" bunch of strip malls with stores and restaurants covering a good 20+acres just off an exit in a nice area residential area of Kansas City. BTW, I was tipped off to the this particular location by my barbecue consultant, Kevin Westhues, who I worked with years ago in Omaha, NE. 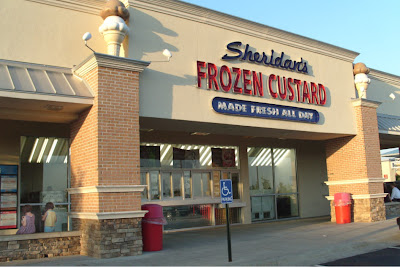 I went up to the window and met another Kevin. This 'un is friendly enough until you tell him you want to take his picture. Then he gets quite unfriendly. Downright weird, in fact.

You ask him his name. He says "William." Not true. His name is Kevin. There's an entire story, but it's frankly pointless and boring, so let's move on. His name is KEVIN. Deceptively pleasant looking, isn't he? 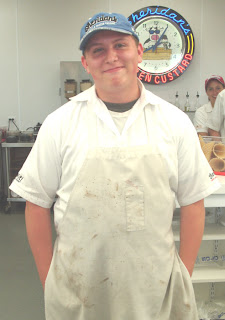 It was here as I tried to decide on ice cream that I met the Hongslo's of Minnesota. Marie and Michael and their kids were enjoying Kansas City's gourmet fare as much as I was. It took them a fair amount of time to order. I think they really enjoy the "ice cream with the kids" experience a lot. 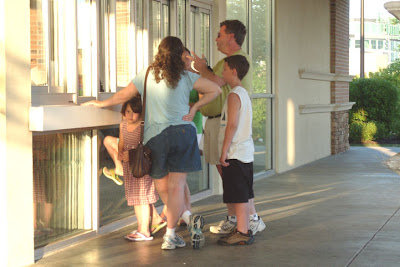 Marie Kibler Hongslo (I know her full name because she "friended" me on facebook a few days later) is as honest and agreeable of a person as you could wish to sit down next to and begin chatting up. I hope she forgives me for posting this picture of her from the backside with her family.

As for me, I wimped out. I ordered this double scoop, which was the smallest thing on the menu at Sheridan's and I only made it halfway through before I was "sugared out." I'm guessing I'll always be kinda disappointed in myself about that. 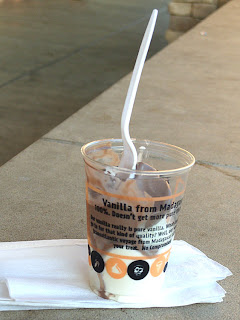 But I'll learn to live with it. That and the "no walking out on to deadly overhangs" thing.

I drove on to Columbia, Missouri that night and woke up to a lovely barbecue turkey sandwich for breakfast before driving on to Lexington, Kentucky.

In Lexington, I was invited to stay with an old friend and make two new ones. Keith, on the left in the picture below, is my old friend.

Keith was the first friend I made when I moved to the East Coast years ago. His best friend Andrea and their dog Autumn are my new friends. Check out that dog's face. Andrea's face is pretty darn cool, too! 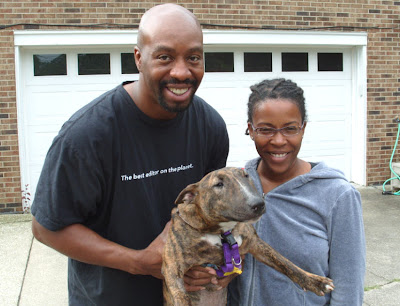 I enjoyed my time there so much that I wanted to enhance the local economy. 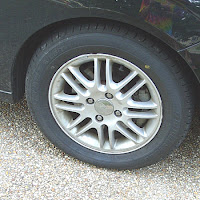 So I bought myself a gift: a spiffy new tire. Don't ask.

Eventually, I arrived in my new home. And boy-howdy-yessirree, I was glad to get out of the car. That's more colloquialism, by the way. I learned it in Kentucky... waiting for my new tire to be put on.

As you may by now know, I drove from Los Angeles to my new home, enjoying the scenery and talking to people I met along the way. I'd smile and compliment them on something and tease them about all kinds of things. From barbecue orders to restroom decor and anything else I could think of... I just talked with people who were out and about. It was very fun.

People always ask me about these cross-country drives. Three time this year has been a bit much, even for my wanderlust.

But the Great American Countryside is absolutely beautiful and the horizon always draws me. I always seem ready to go.

One thing I have figured out that it's not the views (although they are pretty great!) that pull me out my door and down the road. It's the people. 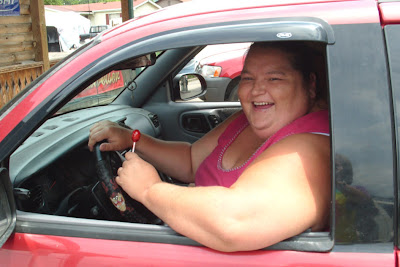 Look at this woman. Can you not want to smile at her? I never asked her name. Most of them, I did not. (Marie: You were special.) I just snapped her picture because she was so fun to look at. She was beamingly happy on July 4th. Which is great, isn't it? And it made me happy to look at her.

Because to me, Americans are like candy and for the life of me, I can't stop wanting to gobble it all up.

I love this Marti. It is great writing about a mundane and otherwise boring trip. And your take on american's being "candy" that you want to "gobble up" is just you telling the truth as a person and a reporter. And that, I think, is what makes you a storyteller.

It seriously was the one part of the trip that seriously scared me. I walked out there... and the gravel was all loose.

There was a spot just before that big "knob" on the end where I would have had to make about a 3 ft leap over. I was a little afraid that if I went out there, I would attempt to make it.

Sometimes, I am more gutsy than commonsense should allow. I came back...shaking.