Do I Lead A More Exciting Life than You? 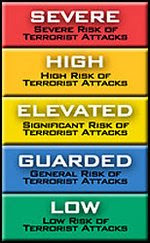 Ahhhhhhhhhhh, yes! Life in the District of Columbia is sometimes a bit dull, but never without its quirky little "Capital of the Free World" mini-dramas.
"Today in the United States Capital, we are enjoying cloudy skies, high humidity, reasonable temps (for July) and a weird little warning."
I noticed the first reference to it on a listserv that I signed up for years back, and kept with through my time in Los Angeles. Now that I'm back on the East Coast, it's full of all manner of "for sale" and "help wanted" stuff.
But today, a message said:

We have seen violence with Flash Mobs in New York and Pennsylvania. One flash mob in Philadelphia pulled drivers out of their cars and assaulted pedestrians and
severely beat a cyclist. ** **

**Implication for DC: Flash mobs could potentially disrupt traffic, entry/exit from train stations, and businesses. A flash mob is an electronically-organized event that creates the appearance of a seemingly random gathering of people. Participants gather and perform an unusual action for a brief moment, then quickly disperse. ** **

I spotted another notice when I logged into a government email account that was recently opened for me at a part-time government media job. (See! I can tell you that without having to kill you. So now you know I don't work for the CIA.)

I am telling you this just to remind you that I do, in fact, lead a much more exciting life than you. Yup, full of opportunities to be beaten senseless while cycling, fattened by french fry gifts, and lugging around a 3 year old who thinks she is Princess of the Universe.

On a more serious note, it's an interesting little view into the Beltway Universe, isn't it? Yes, I do know lots and lots of very important people. I probably can expect to meet lots more in the future, too. But I also sit in Beltway traffic, swelter in the humidity, avoid metro stops where terrorists have organized and assigned mini-meltdowns among would might have appeared to be passersby, and probably see emails between South Carolina's Governor Mark Sander and his Argentinian mistress a few minutes before you do.

Aren't I the lucky one?

(Inside ballgame note: isn't it fascinating that the first concern listed under "implication" is that traffic, transit and business could be disrupted?)
Posted by Marti at 12:50 PM

Hey, that child is in fact Princess of the Universe, so at least she is not delusional.
-handmaiden

Also, I hope you never get stuck in a flash mob of flashers. How awful would that be?