Do all our role models have "someone on the side" these days? Is this something that we need to accept about modern life? 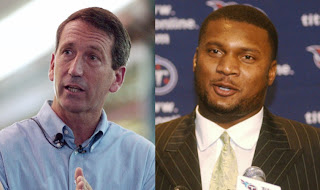 It sure seems like that's what people in high profile positions believe, privately and when caught, want to dare us to argue with them about publicly these days.

From politicians like United States Senators and the Governors of some states, to NFL players who appear publicly happy in their marriages but like to have a little 'sumpin-sumpin' on the side, it seems like those who are successful want extra rewards in their personal lives. And when they are caught, they want to simply say "Oops! Sorry." And we're all supposed to just move on. You know, it's one thing to forgive infidelity, which is probably truly between the sinner and their spouse, but I must admit, I'm not nearly as forgiving when the adulterer has lied publicly. If they were just quiet about it, that's one thing. But public servants, lying to the public, I'm hard pressed to suggest that deserves a free pass. Particularly annoying is when the rationale is "Oh, we fell in love." No sir. 15 year olds "fall in love." College kids under the influence "fall in love." Grownups with responsibilities (Like four sons? Or a mortgage with another person's name on it. Or promises made?) are supposed to be on their guard against that type of thing. These opportunities aren't made in a vacuum bottle. They don't "just happen." They happen because someone left the garden gate open and the rabbits snuck in and started chewing on the radishes. Wouldn't you think that right now, in the midst of the worst economic downturn in decades, most people would be trying to hang on to what they've got, rather than taking it outside their marriage? Taking it down the street and around the corner can get mighty pricey. And in at least one case, police say it cost former NFL quarterback, Steve McNair, shot to death by his financially desperate girlfriend, far too much. Why do high profile, easily spottable public figures think they won't get caught? At the risk of everything that they have why not keep it zipped all day and take it home at night? I don't actually have any answers on this. I don't think it's ironic or even slightly funny. My only thought is to note that it seems like in addition to losing money these days, we're losing a lot of capital in the integrity arena. I would have thought we didn't start with any to spare.
Addendum: this one seems more like an annoyed whine than a blog. Better stuff in the next one, I believe. We'll have some fun again.
Posted by Marti at 7:38 PM

I don't think this seems like an annoyed whine, but that's probably because I could write many many tirades on my special feelings about the evils of infidelity.

I'll just say that I agree with you. Infidelity doesn't "just happen." Good marriages result from many little right choices accumulating into a big pile of self-restraint, security and real joy.