How Low Can Deflation Go? 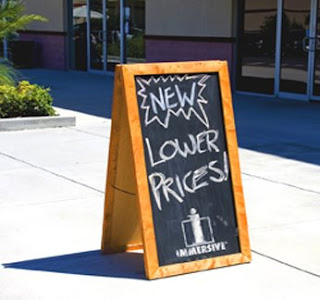 Can I point out something I've noticed during the current economic recession? Of course I can. It's about prices on various and sundry items from furniture to cars to housing. They're going down.

By more than half.

What I find interesting and somewhat ironic is that these price cuts are being made on the same merchandise that has been offered for years. Or even worse, on brand-new, high-tech electronics and other.

The reason this seems to interesting to me is because what it makes clear is the huge mark-up that we've been paying for years. It reminds me of a conversation I had with a family member a few years back. This relative had married a few years before and their (somewhat new) spouse was had a successful professional practice. The practice was very successful, but the office manager apparently neglected to pay the business income taxes as the year went along.

"Marti, we have to catch up and that means paying hundreds of
thousands of dollars in taxes."

At this point, I actually laughed at this relative and said:

"Yeah, okay. Shuuuuuuut up. I know what that means."

I said it sorta laughing at the time, because it's easy to spot what she was doing: camouflaging a boast about her spouse's income by cloaking it in a whining complaint.
Years ago, my boss in Washington liked to call that "rich people's whine: when people on the Norwegian Cruise Line complain about Baltic instead of Beluga caviar."
So now we have merchants crying because they aren't making money as they did in the past, but since we know they are not selling their wares at a loss (unless it's a going out of business sale), what we are now seeing is how inflated their costs have been in the past. What we're seeing is how greedily they have milked the American consumer for the last decade or two.

It's great to see prices coming down, and I want to feel sorry and empathetic for everyone in this difficult time, but some folks are easier than others, don't you agree?
Posted by Marti at 2:10 PM