A Tale of Two Spokesmodels 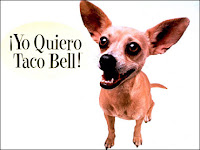 Gidget the Taco Bell dog is dead at age 15. Before we sound the celebrity mourning bells (is there a star on the Walk of Fame somewhere?), I'd be grateful if anyone can explain to me why the tiny dog with the big fake Mexican accent is less offensive than the Frito Bandito? You remember Gidget, right? The tiny Chihuahua pooch who touted nachos and Gorditos with a flick of big eyes and oversize ears. She was the spokes-dog with the deep voice for Taco Bell from 1997 to 2000. She suffered a massive stroke earlier this week and was put down at 15, which in case you didn't know it is utterly ancient in spokes-doggy years. 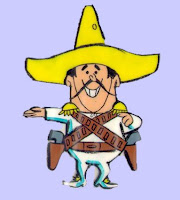 My question is very simple: why is a dog with a heavy accent, a deep, gruff sounding voice and yen for a burrito so much more acceptable than a cartoon character who sings about stealing your chips? The Frito Bandito was the cartoon spokesperson who hyped corn chips from 1967 to 1971, singing this song:

The Frito Bandito was retired under pressure from the National Mexican-American Anti-Defamation Association and others, who didn't like the stereotype he represented. I don't quibble with the idea that perhaps the Bandito character was out of step with our "melting pot culture" in this country, but if so, why was Gidget not in the doghouse with the same group?
I may be mistaken, but this seems to me to be similar to my questions about rodents. To me, squirrels are merely rodents with fluffy tails.
And pigeons? They're flying rats. Research has shown that parasitic pigeons are a significant cause of "sick buildings" and lost productivity among American office workers. Aren't Chihuahuas just dogs that Paris Hilton thinks make cute accessories? I think they might also be a good source of protein, but the larger breeds have more meat on them. Carry on. I'm going to the kitchen for some Fritos. Blogging made me hungry.
Posted by Marti at 12:28 PM