President Barack Obama has issued an apology.
"I'm sorry," he said. What's this about, you might ask?
Poorly planned and ineffectively carried out stimulus?
A Latino Supreme Court pick who has a history of making racially inflammatory comments?
A health care proposal that could finally bankrupt the nation while at the same time run doctors out of business with lawsuits?
Um, no. No. And no. 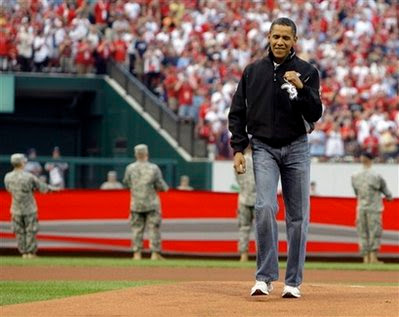 Mr. Obama stands accused of wearing "Mom jeans" when he threw out the ceremonial opening pitch of the Major League Baseball All-Star game in St. Louis. A definite fashion faux pas. Here are the pictures. I tried to choose photos that made clear the, er, problem. As you can see, President Obama showed up for the game dressed casually in a pair of jeans and light jacket. The Leader of the Free World, who is known for cutting a lean, athletic and fit figure in almost any ensemble, looks confident and happy as he approaches the mound. Well, it seems the fashion critics were thinking, we'll see about that.

They must have shaken and hung their heads at the very idea that President Barack Obama should confidently and with a smile approach the mound in such an unfashionable state. The very idea that he should enjoy the activity so inappropriately, unfashionably attired. Yes, the man was about to throw out a ball, which many believe to be an exercise in extreme concentration, requiring focused attention, skill, athleticism and energy. But for heavens' sake, pick up that foot fashionably and make sure that the leg it is attached to is wearing jeans with the latest cut.

Ahem, I was hoping that this recession had us headed for a little fashionista accord. I was hoping it positioned us for a little stylistic detente, if you will, where we didn't attack each other for our fashion choices because some of us have more important things to do even as others of us have too little money to chase after the fashion of the moment. 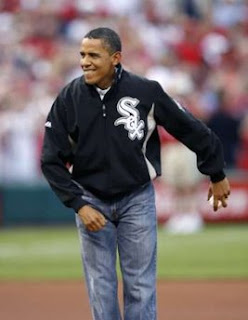 When asked about the jeans, President Obama said they were simply comfortable. He also said, "For people who want a president to look great in tight jeans, I'm sorry." It seems much ado about a subject of absolutely no substance. Let the man have a little fun without criticizing him for the stupid stuff. Yes, he is the President of the United States. But isn't he also just a person? Can't we all remember as a child, thinking about what such a moment would be like for us? How ridiculous is it to criticize over this?

Besides, as any woman can tell you, those aren't "Mom Jeans."

Mom Jeans would cinch up high enough that there would be no chance of ever seeing that grin.