You're a Dirty Girl and I'm Telling! 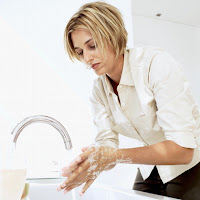 This morning, I got up and pulled on a favorite t-shirt and a pair of shorts. I wore the t-shirt last night for a few hours, before I went to bed. It is, afterall, one of my favorite t-shirts (there are three) and here's an admission: it sometimes gets worn several times between washing. (The t-shirt in question is 25 years old. How do you think it survived that long? Dirt is protecting it!)
Okay, I'm not a sweaty woman. And you know what? I'm not alone.
85% of American women will wear something a couple of times before washing it. Yes, we wear dirty clothes. Or even go hamper-diving. As my mother would tell you, I just toss my clothes around the room, so I rarely go on a hamper tour, but when I do, be assured, those would be some dirty clothes I'm digging through.
You thought the boys were the only dirty ones? Ha! You were wrong!
Glamour Magazine polled 1000 women to discover all kinds of weird and somewhat annoying hygiene habits that we generally won't admit in polite company. It goes without saying that Polite is defined as anyone but our closest girlfriends. Although I can't imagine having this discussion with my closest girlfriends because they're too, well, polite. Want more?
75% of American women pee in the shower. That's not so bad, right? Urine, unless you have an infection, is sterile and nontoxic. And peeing in the shower saves on water that might otherwise be used in flushing a toilet. I wonder if I could get that printed up on a bumpersticker: "Save the planet: pee in the shower!"
40% of us observe the "5 second rule." When something falls on the floor, a sizable percentage of us will still eat it. Boy, I hope they're talking about hard rolls and potato chips here. Tomato soup in this instance is a little icky. But I sorta like the child-like trusting attitude that this implies.
43% of us don't brush our teeth at night. Wow, really? REALLY? This blog is written by someone who can't sleep until she has done the thing with the brush and floss. And she's feeling pretty darned good about herself just this moment.
So do you hit the showers before you turn in? A third of us will hit the sheets still wearing our sweat. No shower taken, we're okay with that.
24% of American women don't wash their hands after using the bathroom. Who are these people? Do they think of themselves as "Ladies"? Now you're thinking twice about the girl that brought your sandwich at the lunch-counter, huh?
Finally, 32% of us go barefoot at the gym. Well, that's just risky. But there's a wild rumor floating through this survey that if you get athlete's foot or some other nasty foot fungus, peeing in the shower will help cure it.
Now you're wondering, huh?
Posted by Marti at 6:14 AM

Oddly, the five second rule is more psychologically acceptable to me than the pee in the shower thing. The tooth brushing I can't believe. I can't sleep with gunky mouth.