You Weigh How Much?

I went to a Goodwill store today. It wasn't my first trip. I'm famously thrifty and, since I am currently in the process of outfitting temporary housing in Washington DC, I am in the market for a few things on the cheap. Things such as Goodwill has in spades. I went wandering through the housewares, just in case anything caught my eye. Then I meandered through the furniture section. I've never been able to get excited about second-hand couches. Then I had a last thought to go look at lamps. The lamps were really sketchy. I think Ikea's $10 lighting section is a much better idea. And I will say that lately, the word in stores is deflation, not inflation. Seriously, Goodwill is trying to sell cups and bowls that I could get elsewhere, new, for the same price. They need to rethink their approach to pricing.
But this is what caught my eye. You know what these are, right? Remember them from your childhood, perhaps? 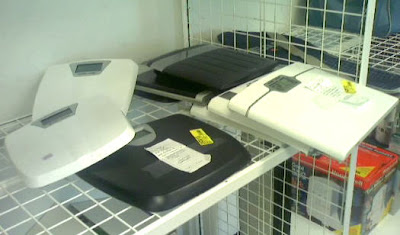 They are bathroom scales. They are flat, floor-models designed for some American to step onto as they step out of the shower and see how much they have gained or lost in the preceding 24 hour period. I've never wanted one myself, and I certainly wasn't interested today, but look at that stack! There were eight used bathroom scales, all cast offs, waiting for some "lucky customer" who wanted a deal on scales. They sorta spoke to me. They chime in agreement with something I've been thinking for a month or two, trying to decide how to say this gently. But there is no gentle way to say it. American society doesn't resemble people anymore, so much as it brings to mind kernels of corn, popping in hot oil. Walking down a street lately, it seems like if I look away for a moment, another two or three of us will "pop" with extra weight. Oh yes, it is a hot spot we're in. Government studies show that 67% of us are overweight; another third of that number are actually morbidly obese. Obesity and overweight will cost us billions of dollars in lost productivity and healthcare expenses that we might have averted, if we didn't abuse our bodies this way. And apparently, some of us want to just settle in to it, too. There's a new reality dating show for people of size. During the commercials for "More to Love," I heard the male lead in the show (because lately, it seems that all shows are about women frantically chasing men) discussing how he likes being a Big Man. I wondered what part he likes most? Feeling cramped in traditional clothing sizes, getting checked regularly for diabetes and heart disease, not being able to get in and out of cars easily or merely using his body as a floatation device at swimming pools. The whole thing makes me sad. It makes me sad because like most Americans, I do fight my weight a bit. I refuse to go quietly into that good night of cellulite. I workout regularly. I am trying to eat fewer processed foods and make healthier choices. (I know I could make a lot more headway if Frito-Lay would make whole-grain Cheetos. I guess I need to approach them about that.) I'm also trying to enjoy life more and have fewer stresses, but oh what the heck, I like a good bit of stress. Makes me feel alive. Anyway, back to our Goodwill market's glut on bathroom scales. I've about decided to go back and buy the whole lot of 'em tomorrow. Maybe the manager'd give me a bulk deal? Might be fun to give them as gifts at Christmas. Just to see them show up at Goodwill again by the Monday morning after.
Posted by Marti at 1:47 PM

Just for you Marti: http://www.fritolay.com/our-snacks/cheetos.html

I feel greatly conflicted by the fatness of the country. I want to lose weight and am working on it, but it pisses me off to no end when thin people assume that fat people don't care about being fat. I hate that I'm not accepted for myself, that people are so judgmental, but I understand their judgment. You know?

Truth is this is a very touchy subject for most people, and even when speaking truth you can offend easily just by mentioning it.

It is DEFINITELY a sensitive subject. As I said, I'm (always)having my own issues with weight.

In case anyone reading this would like to see it, DW has a blog about her (extremely valiant) fight against her weight issues, found here: http://saygoodbyefatty.blogspot.com/

Too many people allow themselves to take offense when none is intended. Being fat sucks for many reasons, but only one of them is when other people are rude.

And Marti, you have never been rude about it. Thanks for your willingness to discuss a sensitive subject. In this PC world, sometimes we let our fear of offending keep us from saying things that desperately need to be said.