So the Postal Service says their business is failing and they need some cuts. I sorta get that. Don't we all? Last quarter, they lost $2.4 Billion, with future projections that by the end of the year, they will lose a total $7 Billion. As we all know, Internet and email have pretty much killed them. Sure, they raise the price of a stamp six to twelve months, and we all know what's going on there. Postal carriers think they need more money and benefits. Otherwise, they'll... uh, go postal. (Whew! Now that we've gotten that one out of the way, we can move on.) But this time, they don't want more money. They want less responsibility. Their big cheese, the U.S. Postmaster told Congress this past week that he needs to cut services back. He really needs to cut new deals and be allowed to whack away at union deals that were made before he was in office. He needs freedom to chip away at service agreements and benefits and entitlements that are "guaranteed" to government workers that frankly, well, we really can't afford right now. Nor possibly could we ever have really "afforded" them. Apparently, our postal carriers weren't paying attention to what happens to big unions when their employers can't afford them anymore. They didn't notice what happened to workers at various auto plants and factories. They took no notice of mechanics and flight attendants who slowly squeezed (is that a word?) the life out of their big bosses. Why aren't they worried? Because their contracts forbid layoffs, cutbacks, or any other attempts to cut their piece of the pie. In fact, the U.S. Postal Service is archaically required to set aside benefits money for "future employees." Do you know any other business that is required to set aside money for employees they don't have? 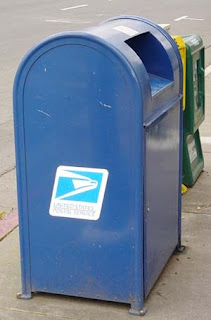 So Postmaster John Potter wants to cut a day or two, here and there. I have another idea. Since a good number of us already have post office boxes, perhaps we might consider whether a lot more of us should get P.O. boxes? We could eliminate deliveries, except where age or illness makes getting our own mail impossible. We'd make Americans responsible for their own make pickups. And think about it. Think of all the glorious "stimulus money" we could spend, building the additional mail drop facilities.

Just makes you want to go out and buy some stamps, doesn't it?
Posted by Marti at 8:50 AM