A Different Kind of News

A friend of mine is having a baby today. She's 42. Her husband also in his forties. They have three beautiful little girls and thought they were "done." But then Lonni started feeling a little sick. Which isn't surprising for her. She suffers chronic health problems brought on by a parasite that was transmitted to her in a bug bite during a reporting trip to the island of Haiti in the 1990's. Eight months later after her latest "little sick" began, her newest little bug may be born today. I woke up this morning and checked her blog. Yes, today is the day. The doctor is going to induce labor. So I went down to Voice of America, to get some training in using their new computerized video-sourcing system.

Meantime, the Washington Post notes that President Barack Obama is in Mexico, meeting with the Presidents of Mexico and Canada. As a group, they are called "The Three Amigos." I think that started during the Bush administration, because Bush, being former governor of Texas, had a special affinity for his southern neighbors. And maybe he liked the sound of saying "Adios, Amigos!" whenever they parted.

Lonni's "guest blogger" on her page says that the hospital staff tested to make sure that Lonni and the baby were in the best possible situation (heart rate, blood pressure, etc.) to start the labor. Then they gave her a drug to start the process. Several of Lonni's friends said they were "on pins and needles," waiting for her baby to be born. The new phenomenon of blogging has served Lonni well. She notified all of her friends that she was going into the hospital to wait out the baby's birth, and then was able to update us on a daily basis. In turn, she got back support posts full of love from family and friends on a regular basis. And anything that she felt she wanted to discuss further, she could take to private email with specific friends. She's stayed on my tail about various issues, being supportive and encouraging and pregnant, all at the same time. Online.

The NYTimes reports on a deadly day of bombings in Iraq. In the most devastating attack, a pair of flatbed trucks packed with bombs exploded simultaneously in a village near Mosul. Altogether, 50 are dead.

There was another update about Lonni and the baby a few hours later. The guest blogger said that Lonni's mother, who has stayed off and on for ten weeks alternately by her daughter's side and with her grandchildren (thus truly earning the nickname "Saint Dee") called to say that the labor was progressing and Lonni would soon be given that lovely drug treatment that women in labor scream for (if they wait too long) called "an epidural." There was some pre-delivery concern that the baby couldn't handle a vaginal delivery, but an epidural means they are going for it.

NYTimes also says that deathtolls from the typhoons in China are still climbing. The video from that region was stunning over the weekend, with people, cars, and even a six-floor hotel swept away in the waters. I wondered how the cameramen even got in to get those pictures safely.

Thank heavens there will be no pictures until after the delivery is over. And then it will be "smiling mother/father and conehead." I live in terror of those maternal "from the battlefield" pictures. I'm not much on reality tv, and since the "delivery room videos" kicked that off, maybe now we know why. 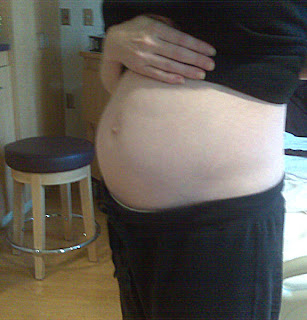 I've now hit the button to "refresh" on Lonni's webpage so many times that it seems silly. I know that things are going as fast as Lonni and her sweet baby boy can handle, but I am wishing for more information. I'm alternately holding my breath in anticipation and exhaling in frustration. Accustomed as I am to charging up the sidewalk with a microphone and knocking on a door or two, this is so different. I'm finding the back and forth of it all amusing. With all the world's news at my fingertips, it boils down to the fact that today's biggest news for me comes out of a hospital room in Boise, Idaho where it's reported on a blog tucked into an out of the way spot on the Internet. But I just can't help it. I am waiting and praying for word of one tiny little life. Good luck Lonni!

Update: Lonni's son was born the same day this was posted. He weighed 4 lbs. 4.5 ounces and was off a respirator within 24 hours. He's doing great, but as a preemie, will be staying at the hospital an extra month. Lonni will be/was released three days later, freeing her from her ten week hospital stay.
Posted by Marti at 1:59 PM