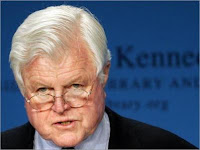 Yes, I knew and, for a few years, frequently interviewed him. The picture to the left is how I see him in my mind.
I was always sort of caught between professional admiration of a man who really knew his stuff and how to work the political system in Washington to the advantage of his home state and his causes, and the other concerns about some things in his background that made him seem a little tawdry at times. We won't discuss those further here.
Instead, we'll discuss what I knew of him personally. He was unfailingly kind and gracious whenever I interviewed him. In spite of seeing me waiting, as if I was some sort of Washington political paparazzi, outside a hospital when his wife was ill. In spite of knowing that all of us were in Hyannisport or Martha's Vineyard when his nephew's plane went down. In spite of... all of it... he was kind.
I remember asking for a "one-on-one" interview about a particularly spicy subject. His press aide, Joe said "The Senator will give you two minutes in the hallway after the availability. But the interview is on condition that you shoot him from his good side." I was listening through this without surprise. Of course the Senator would give me two minutes. Hadn't he always?
But when the aide said "shoot him from his good side," I recall my eyes (after rolling upward) slightly laughing as I said, "And which side would that be, Joe?"
He didn't answer. The Senator came in that day. In case you weren't aware, in his later years, he routinely seemed a bit disheveled. His suits were a little tight and his cotton shirts a bit rumpled. To add to the effect, this particular day, he appeared to have used a rusty old ax for his morning shave. He had sliced off thumbprint-sized bits of skin along his jawline on either side. I wondered which was the "good side" that he intended us to shoot? Both sides looked a little bloodied.
I need not have worried. We met him in the back hallway. The light turned on and the Senator turned to his desired angle. Left, I think, was his apparent preferred side. Naturally. It wouldn't be the Right.
Senator Ted Kennedy, dead but not soon forgotten, at 77.
Posted by Marti at 8:16 AM

"We won't discuss those further here."