A Different Kind of Innocence

I don't often get to write about innocence. It doesn't seem to appear in news reports or for that matter, in real life much these days, does it? But it may be about to surface again in the case of a Texas man, Cameron Todd Willingham.
Willingham was a 23 year old father of three on December 23, 1991, when fire broke out in the house where he lived with his wife and three daughters. They were very poor and the wife had stepped out to by a Christmas gift or two at a nearby thrift store. 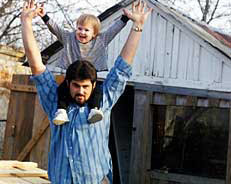 Is your heart breaking yet? (By the way, that's a picture of Cameron Todd Willingham with his daughter Amber to the right here.) Really, you can't make stuff like this up, because people would accuse you of being emotionally manipulative, right?
Willingham awakened that morning to cries from 2 year old Amber. The twins, Karmon and Kameron were also in the house. He tried to get to his girls, but was driven back by smoke and flames. At one point, his hair caught fire as he fought to save them.
The flames overtook the little house. The heat got so intense that the children's bedroom windows exploded and flames poured out the windows. Cameron Todd had to be restrained and then handcuffed to stop his desperate, and probably by that time, futile attempts to save his daughters.
Imagine. The agony.
A short time later, an "arson investigator" decided that flame marks and burn patterns indicated someone had started the fire on purpose. Since Cameron Todd Willingham was home alone with the girls at the time of the blaze, he was the obvious choice.
Suddenly, neighbors who said he tried desperately to save his girls changed their tune to "he seemed to behave a bit oddly." The District Attorney publicly commented that the children had likely interfered with Willingham's beer and dart games. The grieving father was tried and convicted. Initially, they offered to let him plead guilty in order to avoid the death penalty, but he continually said he didn't do it and refused to confess. Over the years, he refused many times. But since the tragic fire happened in Texas, surely you can't expect he was convicted of dispensing such a horribly painful death to his own three innocent children without getting to the death penalty, right?
The convicted arsonist was put in prison where he languished for 12 long years, always claiming he was innocent.
Oh sure, there were a few people like a renowned scientist and arson investigator, Gerald Hurst, who reviewed the evidence in the Willingham case and began saying arson didn't seem likely to him. Texas courts ignored that one.
Then, in 2004, Willingham was put to death by lethal injection, still clinging to his claim of innocence in his final breath.
But now the state of Texas has set up a panel which has begun investigating its own evidence. They hired another arson investigator who after a round of questions with the original "arson investigator," says that investigator seems to be "wholly without any realistic understanding of fires" and said that in fact, he seems to think divining the origin of a fire is done by some sort of "mystic" practices.
Willingham was innocent and the fire deaths were a gruesome tragic accident, according to the new reports. Reports which now come five years and several lives too late.
Posted by Marti at 3:46 PM

You're right - completely and utterly heart-wrenching.

Sometimes I think that good journalism is partly about bearing witness - this would certainly fall into that category. Thank you for sharing this with us.

That is really sad.

The thing that makes me angriest is that if he had had some money and a good lawyer, he probably wouldn't even have been put in jail wrongfully. Grrrrrr.

I don't know, Jen. I think in this case, they had an arson investigator who in their mind, knew what he was doing. But in reality, he was playing God. It's just very, very sad.