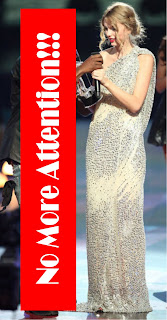 I've got a new theory about celebrities, apologies, and the stupidity of some people. Now that the news cycle on someone's bad behavior is past 48 hours, and people are still talking about HIM, it's clear that he's worked this to his favor. And why? Because we gave it attention. So here's my suggestion: every time you hear anyone talking about this rude incident, talk about Taylor Swift instead. If the other person continues to bring up the rude person's name, make a honking noise until the name is over. Then, resume talking about Taylor. Or talk about whatever else you wish. Talk about a restaurant you've just been to, or a great meal you had at home. Bring up a good movie you've just seen, or better yet discuss the book you just finished. (You do still read, don't you?) Ask for advice on your Christmas list. Offer your latest money-saving tip for grocery shopping. Anything but the bad behavior that was recently rewarded with two days worth of attention and hype that would have otherwise required millions to achieve. And let's figure out a way to do this every time someone behaves badly in public. Sure, there's a "watercooler effect" for a day. But two days? It apparently took the little jerk (did you see what a short little snit he is compared to the 19 year old that he stole the moment from?) over 24 hours to apologize. Are you thinking that delay was an accident? I didn't hear an apology on Leno last night. He said he felt bad. He acted like he was the injured party. Huh? That was the time a sincere person would have apologized and left the spotlight. But to drag it into a second day? Let's tell him and every faker to come that we're not fooled. It's time to change the national conversation to something and someone who can be a positive influence for us, rather than rewarding bad behavior with the attention that the jerk was apparently seeking all the time. Enough is enough! PS: Please feel free to pass this along. Post it on your own blog or twitter it yourself. BUT ENOUGH OF THE EMO CREW!
Posted by Marti at 9:38 PM

Word! And way to go Beyonce for being gracious on the fly.

I am still trying to convince myself that Beyonce wasn't in on it.

I couldn't agree more. I think he's a complete narcissist anyway but I wouldn't be surprised if MTV did it for the ratings. The whole thing seemed staged and then for him to be on Leno's opening night? Come on.