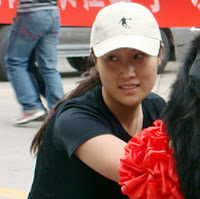 Today, I'd like you to meet Mrs. Wang. Mrs. Wang lives in China. And she's one of 1,330,044,544 Chinese citizens, as of June 2008, according to U.S. government figures. She's probably one of ten or twenty million women named "Mrs. Wang" in China, for that matter.
If that doesn't sound like she's significant, well, she means something to someone. Presumably Mr. Wang. But why should she mean something to you? Because she just got a new dog... for which she paid $600,000.
Remember when the U.S. economy was strong? Remember just a few short years ago when we spent money like it was going out of style and thought that the good times would never end? Has it occurred to you that it may be someone else's turn now? And look! They are already starting to act like us!
Now, I hate to be a pessimist, but does it seem to anyone else like we've been on top for an awfully long time, and that maybe, just maybe, it's someone else's turn to drive the dogsled? Maybe we're now the dogs pulling the sled?
Don't get me wrong. We've had a good run. But we've wasted resources, shot our credit limits to the point that when Timothy Geithner was speaking to students and academics in Beijing, earlier this year and insisted that trillions of dollars in Chinese investments will be unharmed and that "Chinese assets are safe," and in response, they laughed at him.
So here we are, fit for dogmeat. I am trying to stay optimistic about this whole thing. But I think the new economic big dog doesn't eat kibble. He favors rice. And this... 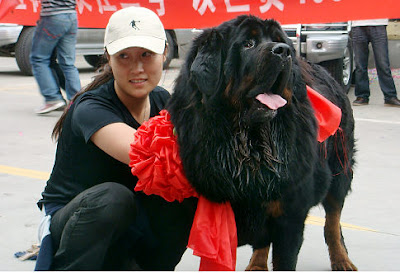 is a $600,000 Tibetan mastiff that may soon be dining better than some Americans.
Posted by Marti at 8:23 PM

Carazy! What is the fixation with dogs? I thought it was odd, clever, and stinky when in Britain the public parks had dog toilets for people who were walking their dogs.

Were the toilets for use by the dogs... or by their owners?

Even in Los Angeles, they would say $600K for a pooch is insane.