I'm not suggesting that this will happen tomorrow. It would take some major doing because it would have to start with the wire services and go all the way down. No more freebies on information and intellectual property.

Those wire services, like Associated Press, Reuters, and United Press International, would all have to change their working agreements with groups to outlaw the posting of their reporting on the Internet. Since every major news organization in the world uses these wire services as the backbone of their product, this would shut down the Internet as a source of information, except in return for money. Which since the services pay their employees, is really how it should be, isn't it?

And all of the "stories" online? Most of those "news stories" that people would still see for free would suddenly be viewed as what they are: bloggers, babblers, pundits, and intellectual property thieves.

All of the real news therefore, would then be either distributed by television, radio, or in those quaint things called newspapers. Sure, the newspapers would go back to being the slowest of the medias, but they'd still retain their journalistic integrity by virtue of providing the most in-depth news coverage. And yeah, they'd have subscribers again. They might even hire back a few reporters.

Televisions and radio stations would gain viewers back, because well, yes, you'd have to get your news from one of the several legitimate sources, so they'd be back in demand.

It's an old school style approach. And it would require some allowances by the government. We'd have to invite the Federal Communications Commission and the Federal Trade Commission to the meetings where such an agreement was negotiated because that might prevent us all from being dragged into court for an anti-trust case.

But there would be no "price fixing." Journalists have rarely agreed on anything (a more snarling, snapping dog-filled pack you've never seen) so how could they or even their bean-counters fix a price? But just to keep it all honest, as we work to restore the business model, it might be acceptable to have government approval.

And websites? Sure, we'd keep those. Why not post the freebie information, advertisements, a few teases to the real stories (available in the morning paper or evening newscasts) reporters and talent bios and emails. But generally, after a few details on the web, we let everyone go back to reporting things other than the latest demise of a venerated newspaper? 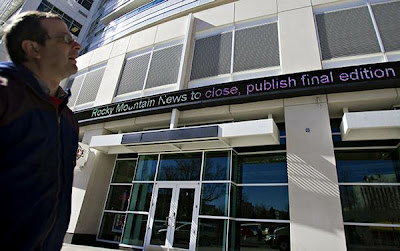 I put this question to someone in management at one of my current media clients. He said he thinks it's too late. He said he thought that newspapers and other media outlets had rushed onto the Internet years ago, without giving serious thought to what it would mean long-term and now the momentum was against them. The industry is "hemorrhaging without end."

But I wonder at that analogy and suggested he look at it in a different way:

"If you slit your wrists, you are allowed to go to the hospital."