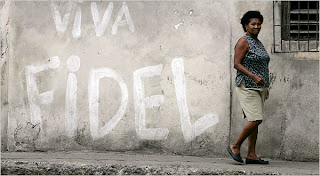 This past Thursday, Fidel Castro celebrated his 83rd birthday. He's been sick a lot for the last year or so, and although he does still remain the Dictator-in-Residence, he's handed over the reigns of every day Communistic Rule to his brother, Raoul.
But he did rise to the occasion to deliver a message of gloom and doom about the world's economic state to us, the crude Capitalists to the North. Do you ever wonder what he calls us behind our backs? "Krazy Capitalists!" "Jello-Pudding-Pop Loving Hedonists!" Or maybe "Toilet Paper Hogs!"
That last seems reasonably likely, since Cuba is suffering through a toilet paper crisis.
Reuters reports an official with the Cuban state conglomerate Cimex as saying:

"The corporation has taken all the steps so that at the end of the year there
will be an important importation of toilet paper."

Also that the shipment will enable the state-run company...

"to supply this demand that today is presenting problems."

It's good to know that Fidel and company are, er, regular, I guess. Cuba both imports toilet paper and produces its own, but does not currently have enough raw materials to make it, according to the official statement. But seriously, what? Did they think suddenly one day they would stop needing bathroom tissue? That their people would stop producing wastes and supplies would no longer be necessary? I'm going to stop short of making the obvious jokes here because I don't consider this particular aspect to be funny. (Ask anyone who has seen me on a Costco run. I like Charmin in the jumbo economy pack.) No doubt I buy extra because of some scarring childhood bathroom incident. Many an adult woman has hurried into the lavatory only to discover too late that she failed to adequately check the supplies. She usually just inquires with the woman in the next stall over. So this is what I would say. Mr. Castro, we are far from perfect in this country. We appear to be in the midst of recalculating our priorities on a lot of things. But we can afford toilet paper. And if you knock on the door, who knows? Maybe what generally hits the fan could in this case open the door.
Posted by Marti at 8:57 PM