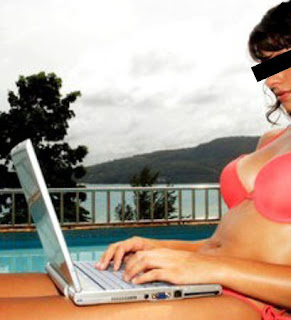 I've been spending a lot of time online lately. A. Lot. As part of my interest in the simultaneously expanding and contracting world of media, I am online a lot and recently took advice from a friend and "unlocked" my account on twitter.com.You know about twitter, right? The Internet site where you post a profile and then update your status as often as you wish, but with only 140 characters per update? Your updates are seen by those who sign up to follow what you say.Followers? The term seems a bit too biblical to me. It really bothers me that it is used on this blog, but then again, I always appreciate the fact that someone is reading it. And occasionally commenting.Anyway, there are people using twitter to market themselves and their websites. There is a woman in the United Kingdom twittering complete recipes in 140 characters. And there are celebrities using twitter to promote everything from their new movies to books they've written, to their relationships and conversations with other celebrities.For instance, Ashton Kutcher famously had a contest with a news organization over who could be the first to run up their followers list to 1 million people. Guess who won? The actor and his wife, Demi Moore, both signed up and soon were twittering things both personal and pseudo-profound. And the Internet roared its approval, with folks all over the globe a-titter about the twittering of Ashton Kutcher and Demi Moore.
When I initially joined awhile back, I wasn't keen on having just any old reader, so I locked the membership. Only those who I approved could read my twittering.Two days ago that changed. And so did my opinion of twitter.com. And not entirely for the better.I was immediately added or followed by people whose apparent reason for being on twitter is just to post links to their porn-ish pictures. I unknowingly clicked on the first one or two, and immediately got an eyeful of someone's thong-clad derriere boosted right into the lens of a very murky PC camera. In the animal kingdom, this would be what they call "presenting." It left me with the feeling of falling victim to a drive-by flasher. I read an article on "How Twitter Will Change the Way We Live," in Time two weeks ago. But this was hardly what the authors or I had in mind. They discussed twitter's part in our ever-shrinking world and how it is bringing people together and allowing them to be part of the societal conversation at every level.They didn't mention that Twitter.com is rapidly taking the place of craigslist.com for sex services. I mean, they're using it to market weight loss and home business plans, fitness videos and books, and celebrity. (I can't explain how I ended up on Paris Hilton's page the other day, but it was oddly hypnotic looking at all the pictures she's posted in her effort to get attention. Then I realized I was fulfilling her desire and shut the window. Ew.) From the pictures posted, I would say now that after craigslist.com recently cracked down on sex providers on their website, the girls have moved their business to twitter.com. It will be interesting to see how or if twitter.com will take action to stop their website from being used in this way.
Posted by Marti at 10:14 PM

My routine goes like this - once or twice a week (usually Saturday, after Follow Friday), I go to tweetsum.com and review who all my new followers are. Tweetsum kindly provides a score that, while not foolproof, is nevertheless useful.

Zero is usually a good score, but also can be indicate a brand-new account opened just to scam or spam. From Tweetsum, I can easily see recent tweets and replies and assess whether the account is used by a real person I care to follow, or just drag over to the Ignore column. I don't even usually bother with blocking.

Because I don't usually have to see such gunk, I'm so glad you were curious enough to find out and report on it for me and satisfy any remaining prurient interest I might have had!

You always manage to find the bright side, don't you?

I love it that you also offered the fix. :)