Of Doing the Right Thing - Cardinals to Peanut Processors 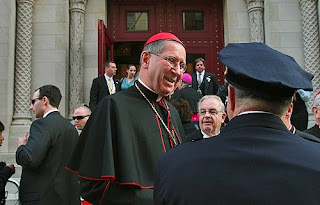 A federal grand jury is looking at Cardinal Roger Mahony's involvement in covering up the child sex predatory activities of priests in his diocese.
One word: "Hallelujah!" At what point does someone tell themselves that it's okay to let someone prey on innocent children and then send them on their way to a new, unwary parish and a whole new set of unwitting victims? How does someone who is supposed to represent God and shepherd the spiritual growth and paths of millions think this is acceptable?

I went to Mahony's news conference two years ago where he apologized and announced the Archdiocese would be offering counseling and a settlement to the 508 victims to the tune of $660 Million.

It was the first time Mahony had spoken publicly and faced the media to address this topic. He gave his statement and then opened himself up for questions. I think I asked the second or third question.

"Cardinal, how do you answer to those victims who are calling for you to be prosecuted for your role in this?"

Cardinal Mahony sort of brushed me off with a "I wasn't the Cardinal during most of period that covered most of these crimes."

"Right, but most isn't all. So how do you answer to those victims who were molested under your term of service and now want you prosecuted for your part in it? What do you say to them?"

He never really did answer my question. I'm not sure there is an answer. I'm guessing the intervening two years have been filled by the search for a way around the law's protection of the sacred and private confessional. Now they've found that loophole and the U.S. Attorney in Los Angeles is going forward. They say U.S. Atty. Thomas P. O'Brien is personally involved in the Grand Jury case.

Earlier this week, the FDA announced findings that the Georgia peanut product manufacturer that is responsible for salmonella that killed at least eight and sickened several hundred people knowingly shipped salmonella-tainted products to food companies. They knowingly did this.

The peanut products were used in things like cookies, snacks, breakfast cereals and other sweet treats. Those products all have one thing in common: their biggest consumers are children. And children are among those most susceptible to salmonella.

How did Mahony tell himself his actions were good and right? The federal government can't prosecute him for keeping confessions sacred. They are considering prosecuting him under a a federal statute that makes it illegal to "scheme . . . to deprive another of the intangible right of honest services." The victims then would be the parents of those children molested. The children he knowingly allowed predatory priests to "serve."

It won't make things right. Prosecution won't restore innocence or resurrect people killed, in many cases, by a half teaspoon of peanut product served in a harmless looking cookie. It's just sad that some people are minus the gene that says "Do something. Make it the Right Thing to Do."
Posted by Marti at 10:36 AM