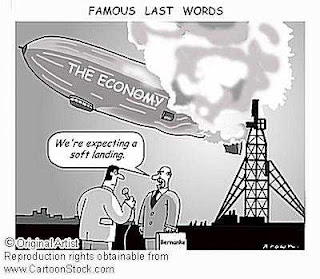 I'm not a big fan of voodoo. I don't believe in the Tooth Fairy, Santa Claus, or Batman. I have seen "The Secret" and think it's a great way to feel better about life, although I wouldn't want to use it in place of cancer treatments. (I don't really think that cartoon is funny, either, but.. oh well.) But when I saw a headline in the Washington Post saying "Obama Calls Slump a Disaster" immediately under another story about how the two year long recession is deepening, causing the quickest economic contraction in 25 years, I thought "Thanks Big Guy." There seems to be a lot of argument about the depth and severity of the recession. I read an article this morning that credibly made the case that this recession is NOT as severe as the one in 1980. The recession of 1980 featured unemployment in the low teens and inflation about the same. That's a tough time. And as I listened to the afternoon White House briefing, I heard a reporter ask what I wanted to know, "Does the President think calling this slump a disaster and all his talking about how bad it is will be helpful?" (Thanks very much, Major Garrett of FoxNews.) Since the recession is being worsened by panicked consumers who are cutting their spending and expenses, it doesn't help to jump up and down on the heap. The media is accused of this all the time, but the reality is, we generally just report the numbers. It is sort of amusing how different some people's tone is these days. Promises before the election; grave-faced serious talk after the election. It would have been nice if voters had spotted that during the campaigns, but the wakeup call needs to end. This reminds me of what an old gentlemen I knew of said about marriage: "Date with your eyes wide open. Be married with your eyes half-shut." Perhaps we need a dose ourselves with some of that "half-shut" as we try to work ourselves through this recession.
Posted by Marti at 2:48 PM