Obama: The Leader for Change 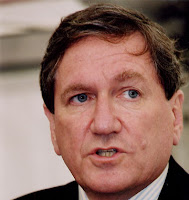 I mean, hey, he campaigned on the idea that he would change things, right? And he's started already. Except look who he's got working for him. Former U.N. ambassador Richard Holbrooke has now been appointed as Obama's envoy for Afghanistan and Pakistan to deal with the resurgence there of al-Qaeda and the radical Taliban movement. Holbrooke is a former Clinton administration appointee, well known in diplomatic circles. (Also well known in journalism circles for marrying one of Peter Jennings wronged ex-wives.) And over at the Justice Department, Eric Holder, may become the first black Attorney General. He also was there before, during the Clinton Presidency.

Of course, we all know who the Secretary of State is; someone who has to have her husband clean up his business dealings so they don't become an embarrassing conflict of interest as former Senator Mrs. Hillary Clinton represents the United States on various diplomatic stages around the world. Also on the job again, the former President's personal secretary, Betty Currie. She's now answering phones for John Podesta, a former Clinton administration bigwig, who is heading the Obama transition team. (Another member of the team? Former Labor Secretary Robert Reich... Clinton-era.)

And back at the helm, steering the new President through these difficult legally challenging times, Greg Craig, who was Clinton's personal attorney during those very trying times that ahhhh, lots of people don't like to talk about.

So... he's got a lot of help that already have their standing lunch orders in at the White House cafeteria, right? Does that seem odd to anyone else that someone who campaigned on change apparently didn't mean "change" as much as he may have meant "change back?"

One of my friends called a vote for Obama a vote for "Chump Change." I was impressed by his rhetoric, but my skeptical side is not terribly surprised that he chose experience over change. I am disappointed, but not surprised.

Clinton had some good... no, great people. But all of them?