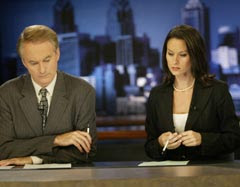 Larry Mendte. Now there's a name that we'll remember for awhile. He was a man who seemed to have everything going for him. A huge, public profile and adoring public. An extremely lucrative job. A loving wife and kids. Tons of awards and accolades.
You would think all that would be enough, wouldn't you? I mean, how much more could he want? Need? Expect out of life? Apparently, it was not enough. Larry Mendte became obsessed with taking his co-anchor down.

Mendte is the Philadelphia television anchor who hacked into his co-anchor's email to read her personal and professional communications. He then used the correspondence as fodder for local television and gossip writers. The co-anchor/target of his obsession, Alycia Lane, already appeared to be in a downward spiral, but Mendte hastened it all, jumping up and down as hard as he could on her grave.
When the FBI served a search warrant on his office and home, confiscating his computer and hard drives, it was a shock to most in the business. I sorta laughed when one reporter wrote, "Mendte never thought he'd get caught." Ya think?
Still it's sad when people who should depend on each other can't. Even sadder at a difficult time for our business and our country's economy when we are more focused on tearing each other down than building each other up. Mendte forgot the cardinal lesson of an anchor team: you sink or swim together.
But maybe he's learned a new lesson that he'll remember a long time. After all, he could have a full six months to contemplate very little else.
Posted by Marti at 9:28 AM

I guess there is a line, but sometimes it would feel nice to just smear mustard on someone's toast and jam when they make you mad.