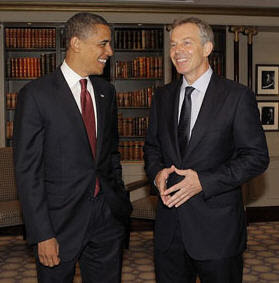 I like to read what they're saying about the United States around the world sometimes. I like to think it gives me a little perspective. At the times when we've been attacked as a country and people around the world say and do things that let us know they despise us, I think back to my personal travels and sorta nod. But on smaller issues, internet newspaper sites can provide such an interesting dose of reality.

For instance, Barack Obama is in Europe today. During this trip abroad, he's met with Israeli leaders. He's met with the Palestinians. He's met with both the current and former Prime Minister of the United Kingdom. He's explaining why he didn't go to meet with those poor, injured American troops in Germany. But he's definitely made his bones on this trip. And clearly, he's well-received and if elected would suffer from no un-likability factor.

But aren't we getting a little ahead of ourselves? Our chariot may be galloping ahead of a large pack of horses. The papers in London seem to think so. Here's their analysis:

I'm not going to go off on this any further. It's pretty well laid-out in the Daily Telegraph. You can read it for yourself.

And sometimes, I think it's nice to stand back and admire both the forest and the trees. A little perspective can be a helpful thing.

Interesting article. (I saw the John Stewart comment on his show and laughed at it.)

I've been *almost* surprised at how inundated the Obama news has been. I'm not a fan of him, or McCain. Still, not liking either of them I'd like them both to get the same air time. Isn't there a rule about that? Something about how candidates have to have equal airtime? People said that's why the Law and Order candidate guy waited so long to enter the race, cause they'd have to stop showing the episodes he's in.

There actually IS a rule except where it relates to legitimate news coverage.

But journalists will tell you that they try to be unbiased in their coverage, which is what all the hub bub in this country is about: they are being accused of a heavy bias favoring Obama.

And they've been so defensive of their position that a well-known line of Shakespeare has been quoted in response.

I've decided to try not to state the obvious on this blog, so I'll just leave you with that.

My favorite from the article was this:

Jon Stewart: "Of course, after a quick meet-and-greet with King Abdullah, Obama was off to Israel, where he made a quick stop at the manger in Bethlehem where he was born."

Click where to find out how to get rid of sleazy blog spammers???

You put one of those annoying letter verification doodads...never mind.

Yes, hopefully, we will have no more of those spammer "comments." Mr. "Health" has commented his last on here. :)