"A Gift from the World to Us in so many Ways!"

Are you one of those poor down-trodden right-thinking Americans who believes the candidates aren't being covered equally? Turns out you're right. At least according to Brian Williams, anchor of NBC Nightly News. But it turns out, there's a reason why. 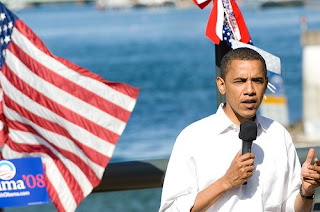 Williams says that newscasters in the United States are giving more airtime to the Democratic candidate because of the historic significance of his campaign, and because he was a new face in comparison to Mr McCain.

(The difference in coverage has prompted the McCain campaign to put together a video entitled "Obama Love", which pokes fun at the media's "bizarre fascination with Barack Obama."
Here it is, just in case you missed this one: http://www.youtube.com/watch?v=u6CSix3Dy04. Doesn't it sorta remind you of something the MRC would put together?)

Williams said: "He (Obama) is the newcomer. His uniqueness in several areas, beyond just the physical, is obvious. So....as the young fresh-to-the-scene candidate, as a man who would be revolutionary in terms of our past presidents, he is getting the lion's share of the coverage.

"Senator McCain has run before and is a well-known figure to Americans, and in name and recognition terms is far and away in front of Obama."

I thought as journalists, we were supposed to rise above the "newness factor" in favor of fairness, particularly in election years. In fact, I would have sworn there were laws requiring us to do exactly that. Sure, we have a little ADHD, but couldn't we hide it better during working hours.

And historic significance? Uniqueness? I bet Hillary Clinton is locked in a closet somewhere screaming with her head spinning 360 degrees every .5 seconds.
Are you one of those poor down-trodden right-thinking Americans who believes the candidates aren't being covered equally?
(Editor's Note: Someday, when I learn to properly work with this site, I will be able to give photographic equal time to candidates. Until then, it's one photo per posting. Apologies to any offended.)
Posted by Marti at 2:28 PM

Things (i.e. candidates, fairness) are not always what they seem.