How much is enough?

We've been treated to a week of wall-to-wall coverage of Barack Obama's whirlwind trip to the Mideast. The Democratic Presidential Candidate visited some troups. And Obama met with Israeli and Palestinian leaders. He went on to Europe.

Meanwhile John McCain draws out one lonely print reporter at a stop in New England and today rides a golf cart.

It seems like as media, we're awfully defensive about our coverage. It seems like we're making ourselves hoarse denying that Obama is unfairly being given more airtime. Does anybody else think we might be protesting just a little too much?

And would someone please ask the question I want to hear: Does a week's tour of diplomatic hotspots fully prepare you to set foreign policy as the Leader of the Free World?

Of course, maybe McCain was merely being Presidential, riding around in his cart. Maybe he was being very-extra-special-Presidential. Afterall, do you have any idea how many these pictures of President George W. Bush in a golf cart are available on the web these days? 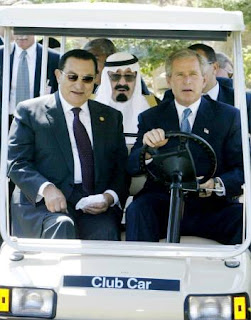 It's all just something I was thinking about.
Posted by Marti at 10:29 AM