A Penny for Your Thoughts... 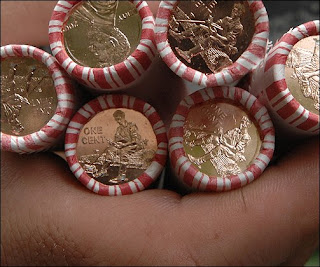 "A penny saved is a penny earned."
"Every time it rains, it rains pennies from Heaven."
And even more outdated,
"Here's a quarter for you and your brother to buy some penny candy."
Penny candy is a term that died about 30 years ago. At that time, penny candy could make the day of a child. It was individually packaged and came in near endless variety of which any kid could list their favorite. But as will happen, the cost of sugar rose. The price of these smallest bits of candy sold separately went to several cents or a nickel. The term simply went out of use. This recession won't bring it back, but it is causing Americans to think about how they spend money. Those pennies that have been so casually left on the counter are now being put in the pocket, collected, and valued.
And now in honor of the 100th anniversary of the smallest and most long-running American coin's current featured face (100 years of Lincoln, but the penny itself actually dates further back.) the U.S. Mint is issuing 1-cent coins with four different designs on the back, each coming out through the year 2009.
By the way, the coin isn't legally named "penny." It's actually a 1-cent coin. And collectors are rabid about having as many of these commemorative pennies as possible, tidily rolled up in their U.S. Mint wrappers. The U.S. Mint decided not to be driven to distraction by numismatists, as coin collectors are known (or numistmatics... haha!) and allowed each to purchase only six rolls each.
I've been watching and hoping this recession restores a little common sense to how some in our country think about and value money. I'd also like to see it restore some value to reality instead of our culture focusing solely on what can be purchased on a Friday night in a darkened theater for $13.
Lately, I look at the advertisements on television and note that some home improvement (and other types of stores), which must be suffering greatly due to the downturn in home building, sales, and renovations, are now offering "everything at greatly reduced prices." I am sure they think that's a wonderful thing to advertise to consumers, but to me it logically says that in the past their prices were greatly inflated. I mean, they've still got to be making a profit somewhere, right? I wonder that no one has pointed that out to the great marketing minds at Lowe's Stores.
Remember last year during the gas crunch when food processors and grocery manufacturers were trying to avoid being accused of inflating their prices so instead they just cut the size of the packaging and hoped consumers didn't notice? This year, they'd do anything just to hang on to the sales they have at the prices they try to command. The word "deflation" is coming into view.
Wouldn't it be nice if with some of our deflated dollars and our now re-valued 1-cent coins, we could somehow buy back a little of our lost American way of thinking? If we could restore the simpler times of our parents and return to valuing time spent together? A few dollars could buy a backyard barbecue with friends in a way that the same amount doesn't really cover more than one or two beers in a darkened smokey bar filled with too much noise.
Our parents knew how to make their own fun. Their good times were at home: theirs or those of friends with their loved ones around them. And those times were purchased with pennies to spare.
Posted by Marti at 10:29 AM