All the Large Economy Size Garbage Bags, Laundry Detergent and Chocolate Chips You Could Ever... 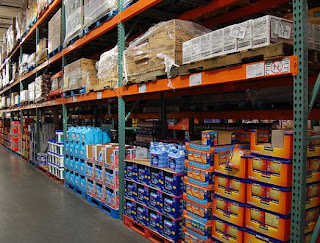 Costco has ruined my thriftiness. Seriously. Please check my logic on this item.
When I moved to LA, I got a membership at Costco. It's a state and a state of mind where the two go hand in hand. You drive to the DMV for a license and then over to Costco in the same trip. I lived less than a mile from the Van Nuys location and since they sold the cheapest gas in a 4 mile radius, it just made sense.
Then I started doing a little catering. I spent enough time and money at Costco to warrant getting the executive membership. The black card. $100. It gets you in the door an hour earlier than the rest of the riff-raff and... you get money back. Which, if you're doing some catering, adds up fast.
The catering ended over four years ago. But the card stayed. And I still bought large sized packages of items. I also bought a freezer to keep those items in. Sometimes I bought electronics. I had never been a big buyer of DVD's, but seeing as how they were less than $20 each, it seemed like a good deal. In short, I think I spend more because of Costco than I might have been likely to, if I didn't have the card. I think lots of people overbuy on printers, lightbulbs, batteries and televisions. We started to think of some of those items as disposable instead of repairable. Things last just until the end of the warranty and then what do we do? We turn around and buy a new one... without ever pausing to consider repairing what we have because, of course, we want the latest updated technology. What are we... 15 years old? Sure, I get a good price on gas. And insurance. Also asparagus. But I can't remember the last time I used all the batteries in the Costco pack before the darned things died. And I'm not sure if I really needed all those pairs of socks or flannel jammie pants. I live in Southern California, for crying out loud. I certainly couldn't sleep in them. Ugh. Like velcro in the sheets. Yes, I mean it. Costco ruined my frugality. There you have it. I lost my soul at Costco... although I did find an employee ID name tag in the parking lot at that lovely Van Nuys location. The name on the tag? Jesus.
Posted by Marti at 3:59 PM