Is This A Reporter?

This may be a little "inside ball game" for those of you who aren't in the media. For those of us watching the demise of our once-noble profession, today offered up an example of everything that we warned and watched against. So this blog briefly examines this example of what happens now that anyone with a laptop and some brassiness in approaching a media outlet can now hang a "press" tag on the brim of a cap and head out for a news event. The results are something that was only a matter of time and actually, it could have been worse. A "reporter" was removed from near Air Force One today in Los Angeles, after she seemed a little too forceful in her efforts to give President Barack Obama a letter she had written. 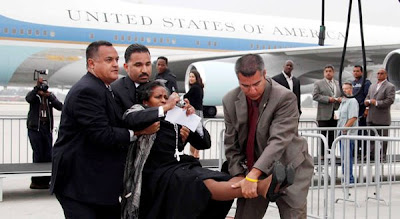 According to various reports, the woman, Brenda Lee, said she had a letter for the President and asked a Secret Service officer to give it to Mr. Obama. He refused, referring her to a White House staffer. She refused to give the letter to the staffer so apparently, after refusing to leave quietly, she was carried out by her hands and feet. Ms. Lee claims to be a reporter for a Macon, Georgia newspaper. She claimed that she has White House Press credentials. She is a resident of Anaheim, California. Lee also says she's a "Roman Catholic Priestess." I wonder if Ms. Lee may be a case of a "citizen journalist" thinking she has gotten into the sky-box and can now call the game to benefit the home team. She may be a little confused by the dizzying height that she perceives herself to have attained. White House Press credentials, as those of us who have had them now and in the past can attest, are different things than just "access for an event." White House Press credentialing requires filling out forms, being photographed and fingerprinted, and then giving the Secret Service months to look into who you are and the life that you've lived. It's not granted easily to anyone who doesn't require it. Usually, such credentials aren't extended to people who live in California, based on the fact that they don't need such access because they don't frequent the White House Press Briefing Room. Access for an event is likely what Ms. Lee was granted by the Secret Service. Reporting for a Macon, Georgia newspaper such as the Georgia Informer is very possible. Ms. Lee is published and some of her writings appear on the monthly newspaper's website. She is probably a "stringer," who has sold some of her writings to the small media outlet which, like all media outlets, is struggling to keep itself in the game and afloat. That's one of the ugly realities of modern journalism. As for the letter that she had written, Brenda Lee says she wrote a letter opposing gay marriage. She says she's a Roman Catholic Priestess. She said her black dress was in fact a cassock, the garment of a Catholic priest. I am not Catholic, so I don't ever claim to be an authority on that religion. (Nor do I claim to be an authority on my own religion. I've got my learners' permit there and that's enough for me.) But since the Catholic religion doesn't ordain women as priests, I am skeptical of the idea that she represents that faith. But let me also point out this: an actual journalist wouldn't have tried to hand something to President Obama. A professional journalist would realize that anything he or she had to say could be said where we would say everything else: in the media outlet. Anything I have to say to Barack Obama is said on the air or in writing. We're in an era where we have to look closer than ever to see who the legitimate journalists are. Just as a polaroid digital camera and access to Adobe Photoshop doesn't make someone a photographer, picking up a notebook, taking a few notes and writing a couple hundred words doesn't make you a writer... much less a reporter. We now have newspapers being published in places like Pasadena, but written half-way around the world by "reporters" in Jakarta. People are listening to talkers like Rush Limbaugh, Glenn Beck, and Bill Maher and confusing these pundits with reporters. Sometimes this new era has produced great results. We've seen cell phone video of news events that would otherwise never have been seen. People are witnessing things and coming forward more ready to describe what they've seen than ever before. But it also results in pictures of women being carried out of press areas by their hands and feet. And it's likely to produce more and more of these bad outcomes for awhile, until all of this shakes out. It's guaranteed to make those of us who are professional reporters cringe a bit. I saw a quote from Morley Safer of CBS "60 Minutes" last week. He said that he "would trust citizen journalism about as much as (he) would trust citizen surgery." That's about right.
Posted by Marti at 1:05 PM