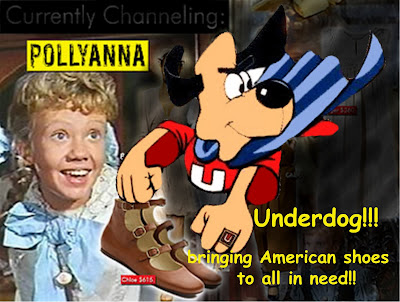 There's a study out that shows we'd all be happier folks if at the end of the day, we'd focus on finding three good things that happened that day and analyze why they happened. Sounds simplistic, doesn't it? What Thinktank run by Pollyanna and Underdog came up with that one, you wonder. But it's actually a research project being coordinated by Martin Seligman at the University of Pennsylvania. He and his colleagues collected about a hundred different suggested ways to increase happiness and they're are now systematically going through them, one by one. It's more of a scientific approach to happiness and I like that about it. I'm going to just take this one and go forward with it. I think we're in such a tight spot right now, economically, that to do otherwise is to merely go with the cycle. Since it seems a downward spiral and I've always liked to buck the current, I'm going to give it a try.
And I have my own anecdotal evidence to offer.
One day when I was a wee cub reporter in Albuquerque, New Mexico, I went out for a little run. I left the house, smiling and happy. I had just walked out of the housing development and then took about seven steps of my run when I was hit with it: a black, rising tide of unhappiness, bleak depression and utter hopelessness. All this drama played out in seven quickly taken steps on a hot sidewalk at age 23. Can you see why 20-somethings can't be allowed to rule the world?
I immediately stopped what I was doing and assessed what had caused my mood to change. I thought "Wow, where did that come from? I have a decent job, enough food to eat and clothes to wear, and good friends around me. Why am I suddenly depressed?" And right then, I realized that day's depression (in my particular case) was just a mood that I had allowed to envelope me, and further, that if I wanted to, I could change back just as quickly. So I did. I can't say that life has been perfect for me ever since. I've had a lot of bad things happen. Jobs lost, cakes fell, boyfriends dumping or dying, and friends who have proven false. But I've never gotten seriously depressed again. I've had bad times, but always known that they were temporary and that I could work at them and change them. We're in a rut of bad attitude in this country. Oh, I'm not saying that we aren't in a bad spot. Clearly, we are. But if we don't change our attitude to allow for recognition of the good things that happen in our lives, we'll never really experience them, will we? I think we're headed for a rocky spot where we're going to have to make do with less. You've heard those fire victims, looking at their burned down homes, with tears in their eyes saying "Thank heavens we all got out ok. It was only stuff." I think that's a phrase we're going to have to start learning. We may have to be "ok" with a lot less stuff in the future. And we're going to have to internalize the feeling that that truly is okay because otherwise, nothing will ever be enough. So three things. From now on, I think I'll just blog about three positive things here at This Day. Three positive things in the news, in my life, in the media, in politics. I've tried not to complain but to gently, humorously point out the idiosyncrasies in the media and politics in the past. Now, I'm going to cut to the chase and find the positives. Which somedays, I hope will be gently humorous as well. We'll figure it out as we go.
PS: about the picture. Yes, I know it's ridiculous, but it's fun. Don't you agree?
Posted by Marti at 10:05 AM

I firmly believe that we, as people, are way too willing to be told how to feel by those around us. That includes the media telling us how to react to what's going on in the world.

I think when we focus on the good in our lives, the bad gets put in its place, we get a new perspective, and we are much more capable of coping with those temporary glitches that hit us all.

Finding three things each day is a very simple, yet very effective, goal.