"What We Must Hope for, is Hope Itself!" 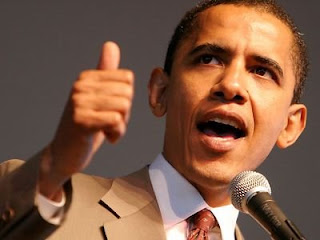 Well, I've paraphrased. And badly. But I think hope is going to be that important this year.

In just a few short weeks, we shall have a new president; a new leader for this country and the most powerful man in the Free World. And since it has been well-noted that he comes to the job a mite bit under-prepared but proclaiming himself the Leader for Change, I would like to note that what he does do well is something we haven't seen in awhile.

He's an awfully good orator. Yikes! The man won election in good portion because of his speaking skills. Remember the last time we had a great public speaker who gave us all hope in the house? Yes, Bill Clinton was good at that, but that's not who I'm thinking of. I'm thinking of Ronald Reagan, who had some level of executive leadership experience having run the "Fifth Largest Economy in the World" of California.

(And please, don't email me to say that GWB is a good orator because I will have uncontrollable giggle fits for days. The 43rd President spent most of his five six months as a President slumping to the side at podiums from coast to coast. Just once, I wanted one of his handlers to approach him during a speech and whisper in to his ear, "Sir, the American people are watching. Show them the respect they deserve by standing up straight, please?)

Ronald Reagan was also the Great Communicator. His talent as an actor was legendarily mediocre, and he wisely moved into public speaking and politics as soon as his good looks began to wane in Hollywood. (Wow, these days, that would have put him running for office at age 23, eh?) He spoke eloquently, to the people, with excellent command of the language but without pretense of high-mindedness. He was down to earth but incredibly compelling.

And he made us all feel better about our country and ourselves, as Americans. He knew that we wanted to feel good about being a Super Power and that to have a hero, we needed a villain. It was so gratifying when that Villain ran out of money and with all the flourish of a vaudeville curtain torn aside, the Berlin Wall came down. Fortunately, he knew he wasn't the be-all, end-all intellectually, so he hired good help, too, to carry out his ideals and they became our ideals. He provided our best image of ourselves.

So now we have Barack Obama, elected because he makes us feel good and we all want to join in the change and be part of the future of racial equality in this country. (Nevermind that it doesn't exist. There's a saying in Hollywood: "Fake it 'til you make it.") President-elect Obama is everything we like in a President in these United States.

He's tall, slender, youthful and good looking with a strong, well-educated woman by his side and two beautiful daughters to raise in the White House. And one heckuva public speaker.

The man brings together all the best traditions of public speaking, from Martin Luther King's use of anaphora (repeated phrases, like "I have a dream...") to his dynamic vocal delivery, use of pauses and pacing, and even his exceedingly apparent personal confidence. He exudes the hope that we are looking for.

And let us hope that he can deliver on it. Otherwise, 2009 may be very dark indeed.
Posted by Marti at 9:05 AM