It Runs in the Family... 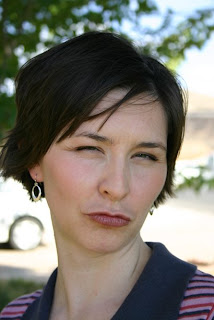 I have a lovely niece who likes to write. Don't you think she's lovely? (She hasn't told me, but I'm pretty sure that's exactly the face she makes during most of our conversations. Hmmmm.) She's just published her first article in the hometown paper in the tiny little Western village where she lives. (I drove through there several weeks ago. Trust me; it's a village.) Here's a link to the newspaper's site and article. http://www.hurricanetimes.com/article.cfm?articleID=18206

In the true spirit of the season, I thought "Bah humbug, kid! Get used to it."

I went on to suggest all kinds of changes, additional punctuation, explanations of various terms and names that would be needed even if only the 27 families and their various scarecrows did all read it. ("What is a 'Lin tree'? Is that a new species of fur?" "Who are the ladies of the Desert Rouge Hattitudes? Is that a group of overly made up hat-wearing grannies? What does that mean?") Oh my goodness, you would have thought I had said her writing was total poo and that Auntie no longer loved or would share funnies on youtube with niece-ums.

A day later and it was my turn. I was preparing for a meeting to discuss internet and social network marketing proposals with a group that I'm interested in working for, and I turned to nicey-nice-Niece and said "Would you mind taking a look at this for me?"

I have to admit genuine pride in Ms. Nicey-nice at this moment. She's so humble and probably a lot nicer than her Auntie. (Or was she being facetious? There's apparently a wild streak of that in the family, somewhere...) She said "Oh, you want me to look at it?"

I have tried to explain to her in the past that professional writing is an extremely collaborative kind of thing. Journalists often ask for their editor's eyes on what they are working on. Or they turn to a trusted colleague and ask which turn of a phrase they prefer. Egos are nice things, but they generally cost too much for my backpocket. I'd rather be right on the facts and on the writing.

So my Ms. Niece-let read my report. She gave it a thorough going-over, too. And returned it back to me with changes made in the best possible way. (A microsoft document software that I'm still not completely sure I understand, but.. Ms. Nicey-Nice does!)

And I went on my way with a better report. Because Ms. Nicey-Nice Niece who reads occasionally at this spot on the Internet, that's what we do in journalism: we work together. We collaborate. We appreciate along the way. And things get better.
Posted by Marti at 1:05 PM

Thanks for all the help Auntie. I'm working on the sensitivity day by day.