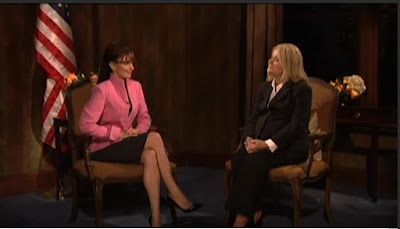 There she blows, Tina Fey masqerading as Gov. Sarah Palin and doing a brilliant job, by all accounts, of skewing the Republican Vice Presidential Nominee. Here's a link to the video in case you wish to watch the entire seven minute skit.

What I find interesting is the level of influence our comedy programs have in politics at this time. Saturday Night Live isn't a news program, but comedy. I'm not sure I find Bill Maher's show to be anything but one man's vent, so I'll skip discussion of that one.

But I think the most telling thing are the surveys which show that viewers of the Comedy Central news and political shows are the most politically savvy and well-informed of American voters.

It doesn't bother me because I am just in favor of voters getting informed in any way, shape, form, or delivery path. Especially if they laugh all the way to the voting booth.

It does sort of make me wonder if some day we'll be asking which of NBC's programs is more politically influential: NBC Nightly News or SNL?