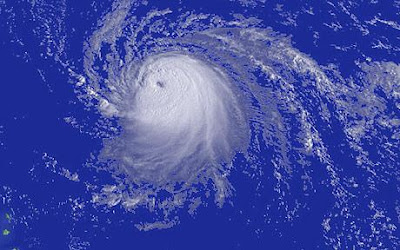 This is what I've spent the last week looking at. Closely inspecting. Trying to dissect and understand. This is Hurricane Ike. I had lofty hopes for this hurricane. But alas, I am once again, disappointed. ABC News, which sent me to New Orleans for Gustav and then on to Atlanta for Ike, finally decided to send me home.

I am terribly typical of my industry in that I do get more interested in things as their "disaster quotient" goes up. But I think in this case, I am content to hope for clear blue skies.

As I made my way out of New Orleans last Wednesday I had to drive because the airport was still closed. With only a few residents of New Orleans and south Louisiana allowed to return home, they really couldn't reopen at that time. But I was feeling just the slightest bit cheated. Gustav fizzed to a Cat 1 and I was disappointed to be going away without having been witness to a "real" hurricane as it struck land near my location.

But as I drove I listened to the local talk radio station. The talk show host was taking calls from local people trying desperately to get home. Those people were trying so hard to find gas for sale to drive back and see what was left of their homes. They were being kept out by the City of New Orleans leaders and police enforcing a tight curfew; by lack of fuel to get home; and by lack of resources to purchase the fuel and food they would need in a city that had precious little provisions once they got there.

It was hard to hear those voices, so full of longing to see and touch their homes again. They just wanted to be once again, in familiar surroundings and get back to normal life. They wanted home and family and maybe a little quiet dinner on the table in the family kitchen.

Aren't those the things that we all want? I know that after waiting in Atlanta for 5 days, I longed to be at home.

So tonight, as Ike leaves parts of Cuba in ruins, I look at that picture above and ponder how something beautiful from a distance could be deadly down below.

And I think maybe... if I am very lucky... it will slide out into the Gulf and never return to land.
Posted by Marti at 7:04 PM