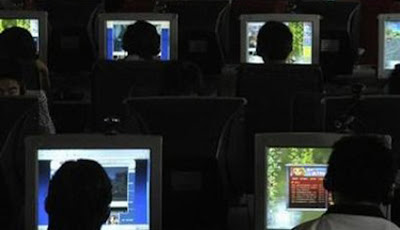 Good news for Moms everywhere: Reuters reports that social networking sites are now officially the top attraction on the Internet.
They have triumphed over pornography, which for years has been the leading destination for internet surfers. They also put down gaming sites, which perhaps were never really in contention as much as they were draws for teenaged boys and very sad social outcasts in their 20's and 30's.
But what this also indicates is a major change in how people communicate, according to some experts.
Bill Tancer, general manager of global research at analytics firm Hitwise, said in the article that analyzing web searches did not just reflect what was happening online but gave a wider picture of society and people's behavior.
"There are some patterns to our Internet use that we tend to repeat very specifically and predictably, from diet searches, to prom dresses, to what we do around the holidays," said Tancer, whose new book, "Click: What Millions of People are Doing Online and Why It Matters," was released a few weeks ago.
Tancer said in the article that porn surfing has dropped to about 10 percent of searches from 20 percent ten years ago. "As social networking traffic has increased, visits to porn sites have decreased," said Tancer, who also indicated that the 18-24 year old age group particularly was searching less for porn.
Social networking is actually often a more convenient way to communicate with friends because it weeds out everybody else. Anybody who has been put on a corporate listserv knows that going on vacation means you need to arrive back two hours early in order to clear out the email box so that you can start the real work of post-vacation catch-up.
Another reason it's good news: it also means we might be reading more... instead of just looking at the pictures.
Posted by Marti at 1:45 PM