I use the term "journalists" very loosely here. This is not a pretty blog post for my profession. In fact, I think it speaks to why media credibility, influence, and ratings are diminishing. This is so disappointing that it is disheartening. I love my profession and this hurts us all. I don't like posting about extremely negative, shameful things, but here it is again and I can't ignore it.

The national politics and issue magazine hired a photographer to shoot pictures of John McCain for a cover story about the Republican Presidential candidate. This is what they chose. 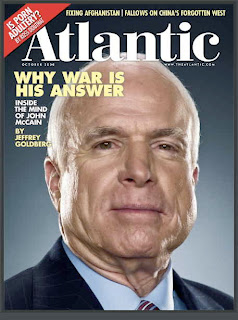 It's on their cover, coming soon to a newsstand near you. Or you can check out the article on their website at http://www.theatlantic.com/. Haven't read the article myself so far. I'm still too appalled. Why?

Because their photographer Jill Greenberg has admitted, and in fact more appropriately bragged about setting up McCain's shoot to deliberately make him look hideous. Frightening. Distractingly, detractingly menacing and ugly.

Those of us who are in "the business" know too well that lighting can make or un-do us. I watch my lighting, angles, and photographer like a hawk. (Um, which no, they don't always appreciate. But it's not their face and name on the story, now is it?) A low angle adds weight; bad lighting adds years. And Adobe Photoshop can add anything else a photographer wishes. She wielded two out of three in this picture: 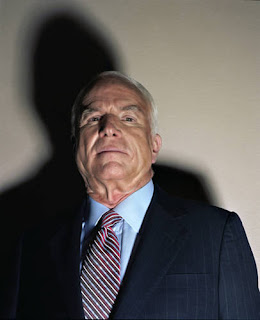 The Atlantic wisely chose to skip that picture along with any others it felt made the candidate look unduly off. But then the photographer (who had the audacity to post the job on her portfolio website: http://www.thenemanipulator.com/. Interesting choice of website name, isn't it?) switched things up. She got really childish, really ugly, extremely unprofessional, and downright nasty with her software. 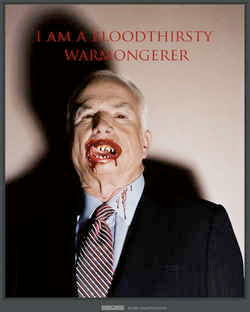 She also turned crude. If you check out some of the photos on this website, http://americandigest.org/mt-archives/bad_americans/the_atlantic_mo.php you will see what I mean. They are, as the site above points out, political pornography.

I think we all see what this was on the surface, but let's see it at its purest: a lack of faith in the American system and voters. Nobody has to take these shots. Americans who are interested in the electoral process tuned in during those political conventions. We all heard the speeches made by these two candidates. We will all make our own decisions.

Nobody needs to throw themselves on the political fire in this country to show Americans who their candidates are. What this says to me is that a rather silly woman chose an underhanded and devious way to demonstrate her belief that her candidate can't win on his own merits. She believed that her help was needed by Barack Obama to win against his opponent.

The Atlantic has apologized to its readers on its website. And the publisher says he is drafting a letter of apology to the McCain campaign. (Who apparently need to hire a more savvy media handler who goes everywhere with the candidate. Who does photoshoots with a strobe light?)

But its a sad day when someone for my profession when purports to be among us, but clearly has chosen to move to a sideline... also known as the gutter.