The End of the Innocence 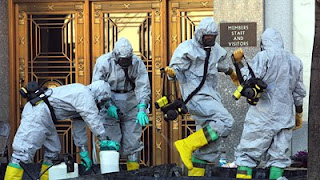 A Maryland scientist who worked on a vaccine against anthrax has committed suicide. Prosecutors say 62-year old Bruce Ivins was about to be indicted in connection with the 2001 anthrax scares in Washington DC. The government's top lawyers were considering whether to seek the death penalty in the case when Ivins apparently killed himself.
For those of us who lived in Washington during the weeks and months after September 11, 2001, this is somewhat of a relief. A former colleague and I were discussing our "day of" stories earlier this week, and it all came flooding back: the shock and numbness of that horrible day; the regular sight of troops in the Nation's Capitol thereafter, and watching our countrymen turn from a happy, relatively naive status to victims of terrorism.
Then came the anthrax attacks. The government investigator's working theory is that Ivins wanted to highlight our vulnerability. His "highlights" killed five people and further terrorized the nation. It was a lesson that cost too much.
I don't know if Bruce Ivins was responsible, but I'm sorry for his loss. I'm also sorry for the loss of innocence in a nation that quickly joined the rest of the world in its understanding of terrorism. Things that hadn't been seen on our shores suddenly became real and have never been far from our thoughts since. Ivins' death won't restore that loss or bring back those good feelings.

Here's my anthrax story... I'm sitting on my sofa, watching the news after a big day where I took a large mailing to the post office. You guessed right, THE Ground Zero of post offices right here in Hamilton, NJ. Within an hour I was at my local hospital getting my nose "picked" by an emergency room technician. My insurer paid for all the testing. I came up negative. Our mail was disrupted for weeks. It arrived in tatters for several months after that. Our community was again shaken. I was on edge until the results came in.