Didn't We Want to Believe? 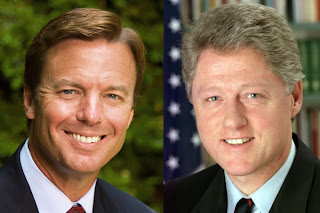 Another Presidential Campaign... another candidate with a secret. It's sad, because it seems we wanted to like him, didn't we?

I mean, the story was floating around for months. The National Enquirer, that pillar of great journalism, was running with it since February. But non-tabloid journalists, real journalists, we ignored it. Nobody wanted to look, and maybe that had to do with the exact instances. Who wants to prove the guy is cheating on his terminally ill wife who may take a turn for the worse when she sees it on the evening news? Heaven help Elizabeth Edwards because that's exactly what happened.

John Edwards was clean cut and good looking in an All-American boy kind of way. He was well educated, seemed to be hard working and family oriented. He stood by his wife as she battled cancer. They lost a child together a dozen years back. They were sweethearts, right? And he stayed in the race with her full support when it became clear that her fight wasn't going to be won.

Now we find out that he had an affair. He was involved with 40-something Rielle Hunter who gave birth to a child out of wedlock. (For a good laugh and dose of the reality of life in Los Angeles, please read this article: http://www.latimes.com/news/opinion/sunday/commentary/la-oe-miller10-2008aug10,0,6388212.story )

And his best defense? Edwards says that is not his baby (does anyone else hear Michael Jackson singing "Billy Jean" in the background whenever they read about this?) and he gave an exclusive interview to ABC's Bob Woodruff in which he made a point of telling his interviewer that the relationship was only "when his wife’s cancer was in remission.”

(And let's give credit where credit is due. Edwards' media handlers gave ABC the interview on the day of Opening Ceremonies at the Beijing Olympics. And oddly, the evening's Ceremonies drew the largest audience ever for Olympic starts: 34 Million Americans. Can you say "blip" for Nightline where ABC ran its Edwards' exclusive? Those are some smart media folk!)

Like a lot of Americans, I'm not sure that a spouse getting a medical "all clear" makes it acceptable to cheat. I haven't checked the Marital Rules Handbook in awhile but last time I looked, "okay to cheat" wasn't listed anywhere in there.

But I do see that since her giving him the high sign to go ahead with a Presidential Campaign while she was facing life threatening (and we now know incurable) cancer, he probably would want us to understand clearly that this peccadillo didn't happen when she was suffering. I mean, if using your wife's health in the public eye to your benefit is important, then certainly it would be best to offer such clarity when staging your indiscretions.

And yeah, I loaded those pictures in together on purpose. They seem to have more and more in common these days. What can I say? Anyway, you were already thinking it.

(In the interest of full disclosure, I should tell you that I flipped John Edwards' picture so that it would face the opposite direction of Bill Clinton's photograph. It's less accurate, technically, but I thought it looked better that way. Also, I am not the father of Rielle Hunter's baby.)
Posted by Marti at 6:24 PM

There is nothing that makes me as mad as cheaters. Murder makes me less mad because they get thrown in jail for their awful behavior. Boo on you, Edwards.