So now it turns. The twist is in. Whichever party elects their candidate this November, it's History In The Making. I'm a little a-political at this point in my life, but I'm curious to see what happens. So many were so proud to possibly have the first African American in the Oval Office.

Now there's the choice of having a woman in the West Wing. It will be interesting to see which group holds more power. 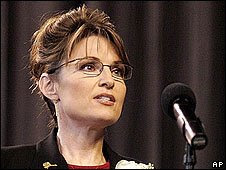 Barack Obama is a voice for change, but the nature of the word "Minority" means strictly speaking, he's got fewer of "his people" behind him.

Alaska Governor Sarah Palin, just announced as the GOP Vice Presidential running-mate to John McCain, is very much the political newcomer, so she could bring new ideas, but she might also fall in line with the Republican Party Line. Well, as much as anyone campaigning with Mr. McCain can, anyway.

But she's not a minority. In fact, "her people," if you look at it from that standpoint, represent half of the voters in the country.

So... the playing field levels just a tiny bit more. Interesting. But... so are hurricanes. ha!
Posted by Marti at 9:32 AM