Can You Hear the Crowd Cheering?

It was great, wasn't it? For just a moment, to turn away from the problems, the worries, the troubles in all our lives and watch him be happy. It was great. 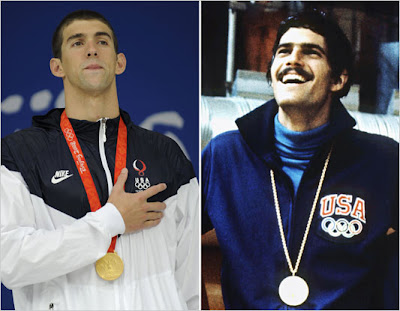 Michael Phelps won his 8th gold medal at the Beijing Olympics this weekend. And even in victory, it was truly great to watch him.

His final medal at this Olympics (it's tricky to state this correctly, because barring unforeseen circumstances, he'll be at the London Olympics in 2012) was part of a relay and my personal favorite part was immediately after the win when he turned to a teammate and shouted "Thank you!"

The previous guy with that title was Mark Spitz who won 7 medals during his run. Early last week, he was spotted making international news by complaining that "nobody invited" him to the Chinese Olympics. He said he didn't think it was right for him to just show up and sit in the stands. He expected to be invited, attended to, cosseted and fussed over. No fuss? No show. That's what he said.

When he was an Olympian, he was famously standoffish. He didn't eat the same things as the rest. He rarely spoke to the other athletes. He was focused, driven, and legendary for being a loner.

So now comes Michael Phelps, the 23 year old from Baltimore, who says he wants to soak up every second of this experience.

Saturday night at the Baltimore Ravens game in Phelps hometown, stadium officials told the crowd that they could stay after and watch him compete for that final medal on the jumbotron. They figured maybe 4000 would stay. At the end of the game, there was a delay but then the relay race began. And at the end, 20,000 Baltimore fans stood, screaming and cheering their homeboy on to his greatest win ever.

And at the end, Michael Phelps turned and shouted "thank you" to one teammate after another. But nobody invited Mark Spitz to Beijing? Hmmm, imagine that.