People Candy: Making the Most of Your Flight

This is Brenda Dymock. She's a flight attendant.
I won't say what airline, but it's not one of the newbies. No "Jet Blue" or "Midways Air" for her. She's an original.
She's been flying for more than 20 years. I met her on a flight in 2009 and this picture has been floating around my hard-drive ever since, making me smile every time I bumped into it. 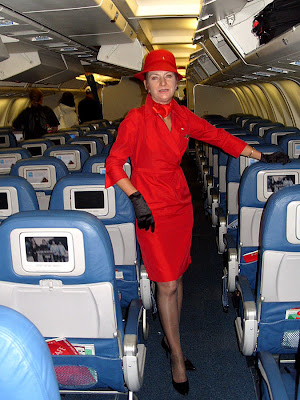 And now here it is for you.

What, you say you haven't seen a uniform like that in quite some time? I told you, Brenda is an original.

Brenda began flying in the old days, when the job was still called "stewardess" and flying was glamorous, exciting and relatively safe. We'd never heard of "al Qaeda" and the only people trying to get into the cockpits were the occasional hijackers who even more occasionally, jumped out with their loot and were never heard from again.

Looking back, those folks seem sort of tame.

Flying was an adventure in those days. If you saw the movie, "Catch Me If You Can" with Leonardo di Caprio and Tom Hanks, it was during the period when "stewardesses" were the smartest of career gals (at a time when the word "gals" was still PC because PC hadn't been invented yet). They were the ones who flew in, enjoyed the best that any city had to offer and then flew out again. (By the way, if you aren't already stunned by that photo, click on it for a closer look. In person, it's as if a giant red bird was walking the aisles of the flight. You can't miss Brenda coming.)

Brenda joined that set and has been amongst them ever since. She told me that this particular uniform is one of the company's many choices, but very few of the current flight attendants deign to wear it. They opt for something a little more modern. And a lot less distinctive.

But not Brenda. Like I said, she's an original.

I would just like to express my love for her hat and scarf.

Yes, but dear, you are a ninety year old, trapped within a much younger body.

She was deliciously colorful, if I do say so myself!

I would love to go on a flight with her as my stewardess! She just oozes with personality, she definitely looks like an "original". Thanks for sharing!